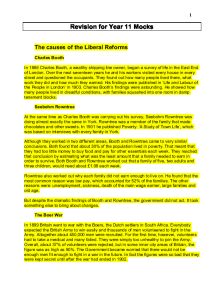 History Revision for year 11. The Liberal Reforms, the Beveridge Reforms and the Welfare State.

Revision for Year 11 Mocks The causes of the Liberal Reforms Charles Booth In 1886 Charles Booth, a wealthy shipping line owner, began a survey of life in the East End of London. Over the next seventeen years he and his workers visited every house in every street and questioned the occupants. They found out how many people lived there, what work they did and how much they earned. His findings were published in 'Life and Labour of the People in London' in 1903. Charles Booth's findings were astounding. He showed how many people lived in dreadful conditions, with families squashed into one room in damp tenement blocks. Seebohm Rowntree At the same time as Charles Booth was carrying out his survey, Seebohm Rowntree was doing almost exactly the same in York. Rowntree was a member of the family that made chocolates and other sweets. In 1901 he published Poverty: 'A Study of Town Life', which was based on interviews with every family in York. Although they worked in two different areas, Booth and Rowntree came to very similar conclusions. Both found that about 30% of the population lived in poverty. That meant that they had too little money to buy food and pay for other essentials each week. They reached that conclusion by estimating what was the least amount that a family needed to earn in order to survive. Both Booth and Rowntree worked out that a family of five, two adults and three children, would need about �1.08 each week. Rowntree also worked out why each family did not earn enough to live on. He found that the most common reason was low pay, which accounted for 52% of the families. The other reasons were: unemployment, sickness, death of the main wage earner, large families and old age. But despite the dramatic findings of Booth and Rowntree, the government did not act. ...read more.

The Government also put into effect plans for evacuation of children, schoolteachers, pregnant women and the elderly. Children who were evacuated were often found to be very unhealthy. Many people were very surprised at this in the countryside. Evacuation led to a complete mixing of social classes. Children went off to their evacuation areas with the rest of the pupils from their school. Their new homes could be anything from a cottage, to a farm or even a castle. Never before had the poor and the better off in Britain found out so much about how the 'other half lived', as children from middle class families were sent to live with working class families and vice versa. Many host families were horrified at the state of health of evacuees who came from city centres. In 1941 the Women's Institute compiled a report on the health of evacuees and listed the problems that they suffered from. The state of the children was such that the school had to be fumigated. The children were filthy. We have never seen so many verminous children lacking any knowledge of clean habits. They had not ha d a bath for months. One child was suffering from scabies, the majority had it in their hair, and the others had dirty septic sores all over their bodies. Some of the children were sent in their ragged little garments. Most of the children were walking on the ground, their shoes had no soles and just uppers hanging together. Many of the mothers and children were bed wetters The Government was also very worried that there would not be enough food for everybody so it introduced rationing. This was intended to give everyone enough to live on. A committee was set up to work out how many calories people needed a week. People doing heavy jobs got more. Young children and pregnant women got extra supplements. ...read more.

We can be protected against major diseases, like TB for example, by vaccination. A further reason is that people now often have much smaller families. The changes in medicine and health have meant that people no longer need to have so many children. In 1900 most families had at least 6 children, now the average is 2. Better health care means that many more children survive childhood. In 1900 many children died before they grew up. This is called the infant mortality rate. Benefits help parents to bring up children and mean that they can afford to feed them properly. Old Age Pensions mean that children are not needed to look after their parents in old age. Contraception is also available so that, parents have much more choice over the number of children they have. Women can now choose to have a career rather than to spend their lives producing children. Changes in the British population in the twentieth century In the twentieth century the population of Britain continued to rise, but the rise began to slow down. In 1900 the population of Britain was 40,000,000, in 1948 it was 48,000,000, in the 1990s it was 57,000,000. The main cause of the rise is a fall in the death rate. This means that fewer people are dying. Infant mortality has dropped as medical knowledge has developed. Many major diseases have been conquered, for example the BCG test and vaccination are available for Tuberculosis and the Salk vaccine is available for Poliomyelitis. Secondary education for all means that, children learn much more about their bodies and how to stay healthy. There is a great deal of emphasis on a healthy diet and lifestyle. Developments in surgery have also helped because it is now possible to tackle more medical problems than ever before. The NHS means that all people can afford medical treatment. But these changes have created problems for the Welfare State. The last paragraph in the previous section explains why the rise in the population of Britain has begun to slow down and is now almost stable. ...read more.