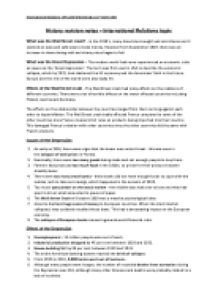 History Revision notes - International Relations: Why did WW2 break out? 1929-1939

﻿International Relations: Why did WW2 break out? 1929-1939 History revision notes ? International Relations topic What was the Wall Street crash? - In the 1920?s, many Americans bought and sold shares and it seemed an easy and safe way to make money. However form September 1929, there was an increase in shares being sold and share prices began to fall. What was the Great Depression ? The modern world had never experienced an economic crisis as severe as the ?Great depression?. The term was first used in USA to describe the economic collapse, which by 1931, had shattered the US economy and the Americans? faith in the future. Europe and the rest of the world were also badly hit. Effects of the Wall Street crash - The Wall Street crash had many effects on the relations of different countries. There were a lot of terrible effects on the worst effected countries including Poland, Austria and Germany. The effects on the relationship between the countries ranged from them turning against each other to hyperinflation. The Wall Street crash badly effected France compared to some of the other countries since France created strict rules on products being imported into their country. This damaged France?s relation with other countries since the other countries did the same with French products. Causes of the Depression 1. As early as 1926, there were signs that the boom was under threat - this was seen in the collapse of land prices in Florida. 2. Eventually, there were too many goods being made and not enough people to buy them. 3. Farmers had produced too much food in the 1920s, so prices for their produce became steadily lower. 4. There were too many small banks - these banks did not have enough funds to cope with the sudden rush to take out savings, which happened in the autumn of 1929. 5. ...read more.

3. Sanctions were shown to be useless. 4. Everybody realised that Britain and France were not prepared to use force. 5. The four major powers - Japan, Italy, Britain and France - all betrayed the League. 6. Smaller nations realised that the League could not and would not protect them. 7. Britain and France decided that the League was useless to stop war, and followed instead the policy of appeasement. 8. Hitler was encouraged to move ahead with his plans. Germany and the Treaty of Versailles * When signing the truce at the end of WW1, Germany thought it would be based purely on Wilson’s 14 points; however the Treaty of Versailles was a compromise between President Wilson's (USA) Fourteen Points and his desire to make a "just peace", and the French leader Clemenceau's desire for revenge. * Germany had to accept responsibility for starting the war, and had to agree to pay for the cost of the damage (set at £6.6 billion in 1921). * Germany's army was reduced to 100,000 men. Germany's navy had to be handed over to the victorious Allies, and Germany was not allowed to manufacture war planes or tanks in the future. * No German troops were allowed in the Rhineland, the area of Germany closest to France. * Alsace and Lorraine – the territory reverted to France by Germany due to the ToV. * Germany was only allowed 6 ships, no submarines and had to get rid of their air force. * The newly created state of Poland was given the German territories of West Prussia and Posen. The port of Danzig was placed under the control of the League of Nations. * Eupen-Malmedy (28 June 1919): Given to Belgium by Germany under Treaty of Versailles.. * Germany was not allowed to unite with Austria (this was known as Anschluss, and it was forbidden). * The Treaty of Versailles was a "dictated peace" as Germany was not allowed to negotiate the terms. ...read more.

Benes realised that Britain were not willing to intervene therefore offered Hitler the parts of Sudetenland where the majority of population was German. However, Hitler did not accept this offer as he claimed that the Sudeten Germans were ?mistreated?. Instead, Hitler insisted that all of Sudetenland must be in his possession by October 1st 1938, or he would need to invade to ?rescue? the Sudeten Germans. The Munich Agreement, September (1938) In September 1938, Neville Chamberlain met Adolf Hitler at Hitler?s home. Hitler threatened to invade Czechoslovakia unless Britain supported Germany's plans to take over the Sudetenland. After discussing the issue with the Edouard Daladier (France) and Eduard Benes (Czechoslovakia), Chamberlain informed Hitler that his proposals were unacceptable. Adolf Hitler was in a difficult situation but he also knew that Britain and France were unwilling to go to war. He also thought it unlikely that these two countries would be keen to join up with the Soviet Union. Mussolini suggested to Hitler that one way of solving this issue was to hold a four-power conference of Germany, Britain, France and Italy. The meeting took place in Munich on 29th September 1938. Desperate to avoid war, and anxious to avoid an alliance with Stalin, Chamberlain and Daladier agreed that Germany could have the Sudetenland. In return, Hitler promised not to make any further territorial demands in Europe. On 29th September 1938, Hitler, Chamberlain, Daladier and Mussolini signed the Munich Agreement which transferred the Sudetenland to Germany. When Benes, Czechoslovakia's head of state, protested at this decision, Chamberlain told him that Britain would be unwilling to go to war over the issue of the Sudetenland. In March, 1939, the German Army seized the rest of Czechoslovakia. In taking this action, Hitler had broken the Munich Agreement. The British Prime Minister, Neville Chamberlain, now realised that Hitler could not be trusted and his appeasement policy now came to an end. Invasion of Poland (September 1939) Hitler invades Poland and provokes the outbreak of World War 2. ...read more.