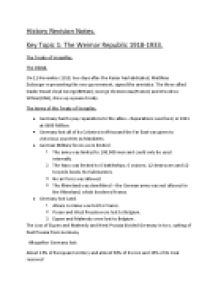 ﻿History Revision Notes. Key Topic 1: The Weimar Republic 1918-1933. The Treaty of Versailles. The Diktat. On 11 November 1918, two days after the Kaiser had abdicated, Matthias Erzberger representing the new government, signed the armistice. The three allied leader David Lloyd George(Britain), George Clemenceau(France) and Woodrow Wilson(USA), drew up a peace treaty. The terms of the Treaty of Versailes. 1. Germany had to pay reparations to the allies ? Reparations was fixed, in 1921 at 6600 Million. 2. Germany lost all of its Colonies in Africa and the Far East was given to victorious countries as Mandates. 3. German Military forces were limited 1. The army was limited to 100,000 men and could only be used internally. 2. The Navy was limited to 6 battleships, 6 cruisers, 12 destroyers and 12 torpedo boats. No Submarines. 3. No air force was allowed. 4. The Rhineland was demilitired ? the German army was not allowed in the Rhineland, which bordered France. 1. Germany lost Land. 1. Alsace Lorraine was lost to France. 2. Posen and West Prussia were lost to Belgium. 3. Eupen and Malmedy were lost to Belgium. The Loss of Eupen and Malmedy and West Prussia divided Germany in two, cutting of East Prussia from Germany. Altogether Germany lost: About 13% of European territory and almost 50% of its iron and 15% of its Coal reserves! Dolchstoss ? The stab in the back. The treaty of Versailles was very unpopular because the German army had never been defeated in war. ...read more.

In November 1923 he cancelled the old mark and introduced a new currency, the Rentenmark. This lead to stability. Political Problems 1918-1923. Right wing and left wing. Right wing of politics: 1. Want to keep society very stable. 2. Want a strong government dominated by strong leaders. 3. Support capitalism –the private ownership of land and business. 4. Stress the Importance of the family, law and order and traditional values. 5. Are nationalists – Placing the interests of the nation over the individual. FACISM and NAZISM are extreme right wing movements. Left wing of politics: 1. Want to change society rapidly. 2. Aim to treat all people as equal and give political power to workers. 3. Oppose Capitalism. 4. Are internationalists – they stress co-operation of nations SOCIALISTS are left wing. COMMUNISM are extreme left wing movement. Violent Political Unrest. One thing that made the Weimar republic so violent was that, political parties had their own private armies. 1. They recruited mainly ex-soldiers, who were unemployed ad bitter that their government had accepted peace. 2. Left wing had its RotfrontKämpfer(Red front fighters). 3. Right wing had its Skahlhelm(Steel helmets – a veterans group). Overall between 1919-1923 there were 376 political murders, mostly of left wing or moderate politicians. However not a single right wing was convicted and executed; this shows how much the judiciary was filled with right wing. The Spartacist League ( a left wing movement) Sometimes extreme political groups try to over throw the government by force. ...read more.

It was also one more thing to make moderate Germans feel that the Weimar was becoming a Success. Between 1923-1929, moderate Germans regained confidence in the Weimar republic. 1. Stresemann had restored economic stability. 2. He had also regained a place for Germany on the International stage. 3. He had kept the support of moderate parties on Left and Right wing. 4. He was steering the Weimar out of its troubled early years. Economic Crisis, 1929-1932. The great depression. The Wall Street crash. In October 1919, share prices began to fall on the Wall Street stock market, in New York. Falling shares meant peoples investment fell in value. On ?Black Thursday? 24th October 1919, 13 million shares were sold. Economic effects. It was equally bad for companies that sold at home or abroad. The world wide depression was a disaster for export industries but high Unemployment meant that domestic demands for goods fell too. Unemployment raised a lot! Social and political effects. The economic collapse caused suffering. 1. The middle classes lost savings, their companies or their homes. 2. Workers became unemployed. People demanded political action, the Weimar republic failed them. Heinrich Bruning (Chancellor) proposed: 1. Raising hopes to pay the cost of Unemployment benefit. 2. Reducing Unemployment benefit to make payments more affordable. This pleased no one. Right wing parties, middle class and the wealth opposed higher taxes. Left wing parties and the working class opposed lower benefits. The coalition of parties which Bruning government depended on collapsed in 1930. Bruning could only govern by decree. Bruning resigned in 1932, leaving a dangerous power vacuum for a new leader to step in to. ...read more.