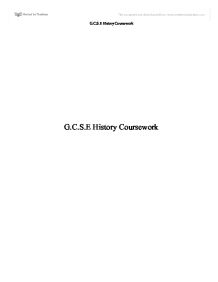 G.C.S.E History Coursework After reading into this source I have learnt that the main reason for the U.S.A s involvement in Vietnam. In the year 1956 the U.S.A was the world's most powerful nation. Also at this time the cold war was at full strength. The USSR (Soviet Union) was the communist world's most powerful nation and was fast catching up on the USA for world supremacy. Both sides had huge nuclear arsenals which were poised to strike each other; despite this both sides didn't want a nuclear war and were trying there best not to aggravate the other. This however changed when the USSR sent nuclear missiles to Cuba, a new communist nation. John F Kennedy's statement shows the fear of the capitalist world of the growing communist world. They believed that if communism spread through south-east Asia then ' the free-world ' would be threatened. The theory that when one country turns to communism then so will its neighbours is known as the domino theory. Vietnam was always a country that could easily be swamped by ' the red tide' of communism. This was due to its history it had been robbed of all its wealth by the Japanese, the British and then the French, 5% of the population owned 95% of the land. ...read more.

Due to this I believe that source C is more reliable. Source D is an extract from Newsweek magazine and source E is the results of Gallop opinion polls from the year 1961-1968. Source D suggests that a majority of the American public supported the war. I however believe that this isn't correct because in the year 1967 televisions weren't available in every household due to there price. This meant that only that upper and middle class could afford to have one. These people would support the war due to` that fact that communism would effect them negatively. Source E is the results of opinion polls regarding America's biggest problem. The opinion polls were made by Gallop an international company who are regarded by many as the leaders of the field. The Gallop opinion polls are constructed from questionnaires taken from people who have different status, different towns, different religions and different sexes thus giving a complete view of opinions. The opinion polls suggests that as the war became old and many thousands of American men came home the public discovered that the U.S.A would lose its first ever war. It also suggests that the public started receiving unofficial reports regarding the war crimes that American troops were committing. ...read more.

This meant that people could see the crimes against humanity the Americans had done. The Vietnam War was the first war in which television was able to show ordinary people precisely what was happening in Vietnam this along with the American government's decision not to censor any form of media or communication allowed the normal person to see atrocities such as MY LAI. Because of this the war had a direct impact on the emotions of the American citizens. Source F is a letter from Vietnam it describes the harsh manner in which soldiers die in rather strong language. First hand information such as this would have had a direct impact on people's attitudes towards the war. At any other modern day war soldiers weren't allowed to send letters which would dampen support. The Americans decision to break with tradition was one that resulted in defeat. In the past wars were not on Americans minds because they were fought along way from home such as World War 2 which was predominantly fought in Europe. However the Vietnam War was still far from home but due to advances in technology this became irrelevant news of incidents in the war took hours rather then days to come back home. ?? ?? ?? ?? G.C.S.E History Coursework ...read more.