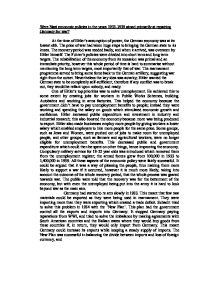 Were Nazi economic policies in the years 1933-1939 aimed primarily at repairing Germany for war? At the time of Hitler's assumption of power, the German economy was at its lowest ebb. The price of war had taken huge steps to bringing the German state to its knees. The recovery period was needed badly, and when it arrived, was overseen by Hitler himself. The Fuhrer's policies were divided into short term and long term targets. The rehabilitation of the economy from its recession was primal and an immediate priority, however this whole period of time is hard to summarise without mentioning the long term targets, most importantly that of war. The rearmament programme served to bring some force back to the German artillery, suggesting war right from the outset. ...read more.

Hitler increased public expenditure and investment in industry and industrial research; this also boosted the economy because more was being produced to export. Hitler also made businesses employ more people by giving workers a lower salary which enabled employers to hire more people for the same price. Some groups, such as Jews and Women, were pushed out of jobs to make room for unemployed people, and other groups, such as farmers and agricultural workers, were no longer eligible for unemployment benefits. This decreased public and government expenditure which could then be spent on other things, hence improving the economy. Compulsory military service for 18-25 year olds was introduced which removed them from the unemployment register; the armed forces grew from 100,000 in 1933 to 1,400,000 in 1939. ...read more.

Germany had started to re arm slowly in 1933. This meant that few raw materials could be exported as they were being used in rearmament. They were importing more than they were exporting which created a trade deficit. Schacht tried to solve this problem in 1934 with the 'New Plan'. This plan had the government control all the exports and imports into Germany. It stopped Germany paying reparations from WWI, and tried to solve the imbalance by making agreements with South American countries and the Balkan states where they would buy goods from these countries if, in return, they would only import from Germany. This meant Germany could increase its exports while keeping a steady supply of imports. The New Plan was successful in balancing the divide between imports and loss of foreign currency, and ...read more.