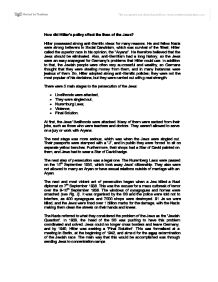 How did Hitler's policy affect the lives of the Jews? Hitler possessed strong anti-Semitic views for many reasons. He and fellow Nazis were strong believers in Social Darwinism, which was survival of the fittest; Hitler called the superior race in his opinion, the "Aryans". He therefore believed that the Jews should be eliminated. Also, anti-Semitism had a long history, so the Jews were an easy scapegoat for Germany's problems that Hitler could use. In addition to that, the Jewish people were often very successful and wealthy, so Germans thought that they were stealing money from them, and in many instances were jealous of them. ...read more.

The next stage was more serious, which was when the Jews were singled out. Their passports were stamped with a "J", and in public they were forced to sit on separate yellow benches. Furthermore, their shops had a Star of David painted on them, and Jews had to wear a Star of David badge. The next step of persecution was a legal one. The Nuremberg Laws were passed on the 15th September 1935, which took away Jews' citizenship. They also were not allowed to marry an Aryan or have sexual relations outside of marriage with an Aryan. The next and most violent act of persecution began when a Jew killed a Nazi diplomat on 7th September 1938. ...read more.

In 1938, the head of the SS was pushing to have this problem coordinated and solved. Jews could no longer cross borders and leave Germany, and by 1940, Hitler was seeking a "Final Solution". This was formalised at a meeting in Berlin, at the beginning of 1942, and aimed for the mass extermination of the Jewish race. The main way that this would be accomplished was through sending Jews to concentration camps. Hitler's social policy therefore had a profound and devastating impact on the lives of the Jews. However, there has been debate on whether he is solely to blame, or whether the German public also had some responsibility. The historian Ian Kershaw has stated, "the road to Auschwitz was built by hate, but paved with indifference". ...read more.

The response to the question is good as it outlined the key steps in the oppression of the Jews and goes through each, in each paragraph, which is a good approach to take, as it show good planning and vision. ...

The response to the question is good as it outlined the key steps in the oppression of the Jews and goes through each, in each paragraph, which is a good approach to take, as it show good planning and vision. The author wisely tries to explain in the introduction why Hitler chose to attack the Jews, however the explanation was quite simplistic, but did the job nonetheless. The author concludes the essay very well, bringing all his/her points together very well. For instance the reference to HitlerÃ¢â‚¬â„¢s social policy, which was what the essay was about, they also introduce a quote from a notable historian. Using quotes is thoroughly recommended as it demonstrates wider reading of the topic, something that in my experience has rewarded.

Analysis was not required for this question, as it was only an explain and describe question. Although any analysis would have been welcome alongside the description, for instance they could have said which of all the policies was most detrimental to the Jews, where as the author just listed them chronologically. There is something to be said for ordering each paragraph about a different policy in order of impact, as it demonstrates evaluative skills, which look good.

The spelling and grammar in this essay appears to be good. The structure was good as well. This essay received five stars as it explain and described the persecution of the Jews clearly, whilst also demonstrating good knowledge, like the Kershaw quote.