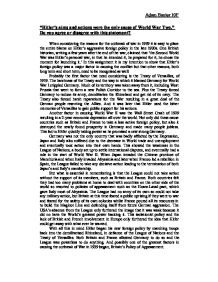 &quot;Hitler's aims and actions were the only cause of World War Two.&quot; Do you agree or disagree with this statement?

"Hitler's aims and actions were the only cause of World War Two." Do you agree or disagree with this statement? When considering the reasons for the outbreak of war in 1939 it is easy to place the entire blame on Hitler's aggressive foreign policy in the late 1930s. One British historian, writing a few years after the end of the war, claimed that 'the Second World War was Hitler's personal war, in that he intended it, he prepared for it, he chose the moment for launching it.' In this assignment it is my intention to show that Hitler's foreign policy was a major factor in causing the conflict but that other reasons, both long term and short term, need to be recognised as well. Probably the first factor that need considering is the Treaty of Versailles, of 1919. The harshness of the Treaty and the way in which it blamed Germany for World War I crippled Germany. Much of its territory was taken away from it, including West Prussia that went to form a new Polish Corridor to the sea. ...read more.

Both countries felt they had too many problems at home to deal with countries on the other side of the world so resorted to policies of appeasement such as the Hoare-Laval pact, which gave Italy most of Abyssinia. The League had no army of its own so could not take any military action, but Britain at this time feared a public uprising if they went to war and feared for the safety of its own colonies whilst France poured all its resources in to build the Maginot Line and defending itself from future German aggression. The USA's absence from the League only furthered the image that it was weak because it did no have the World's greatest power backing it. This isolationist policy and the lack of British and French involvement in Europe only furthered the idea that Hitler could get away with what ever he wanted. With all this in mind Hitler began his new foreign policy by marching troops back into the demilitarised Rhineland, in defiance of the League of Nations and the Treaty of Versailles. ...read more.

There were several reasons why he made this decision. Firstly he was a communist and felt that both France and Britain disliked him. Another reason was because he was not invited to the Munich Conference. This created a great deal of mistrust and anger between the USSR and the Allied powers. The final reason was because the USSR had no alternative, they were not ready for war and only joined Hitler to get time to rearm, knowing full well that Germany would turn on them eventually. So it is my conclusion that World War broke out in 1939, not just because of the actions of Hitler, but because of a whole host of other reasons; resentment of the Treaty of Versailles, the weakness of the League of Nations, fear of Communism, isolationist policies of the West, the Depression, and of course one of the major factors, the policy of appeasement. My personal view is that if Britain, France and the USA had taken a more active role in World disputes, the atrocities of World War II could all have been avoided. Adam Baxter 10F ...read more.