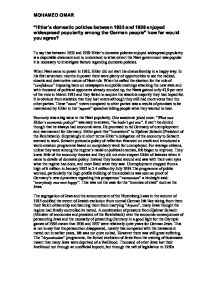 &quot;Hitler's domestic policies between 1933 and 1939 enjoyed widespread popularity among the German people&quot; how far would you agree?

"Hitler's domestic policies between 1933 and 1939 enjoyed widespread popularity among the German people" how far would you agree? To say that between 1933 and 1939 Hitler's domestic policies enjoyed widespread popularity is a disputable statement and to understand to what extent the Nazi government was popular it is necessary to investigate factors regarding domestic policies. When Nazi came to power in 1933, Hitler did not start his chancellorship in a happy way. In his first seventeen months in power there were plenty of opportunities to see the radical, chaotic and destructive nature of Nazi rule. When he called the election for the role of "confidence" imposing bans on newspapers and public meetings attacking the new state and with thousand of political opponents already rounded up, the Nazis gained only 43.9 per cent of the vote in March 1933 and they failed to acquire the absolute majority they had hoped for. It is obvious from statistics that they lost voters although they still had more votes than the other parties. These "more" voters compared to other parties was a results of promises to be maintained by Hitler in his "superb" speeches telling people what they wanted to hear. Economy was a big issue in the Nazi popularity. One academic joked once: "What was Hitler's economic policy?" ...read more.

Most Germans did not confront the regime. They believed that1933 was the beginning of a wonderful new period for Germany as a witness describes it "everything was in order again, and clean. There was a feeling of national liberation, a new start". There were the concentration camps, but everybody said at that time that the English invented them in South Africa with the Boers. The Nazis wanted Germans to believe that the concentration camps were "merely" places designed to shock opponents of the regime into conforming. Since the terror was mostly confined to the Nazis political opponents or to Jews, the majority of Germans could watch what Goring called "the settling of scores" with equanimity if not pleasure. On 6 July 1933 Hitler announced that he wanted an end to violence on the street "revolution is not a permanent state", he declared. He realised that the SA posed a threat to the stability of the new Germany. One group of powerful Germans agreed with him wholeheartedly: the army. Ernst Rohm, leader of the SA, was trying to take over the armed forces of Germany. They thought he wanted to integrate the Nazi SA into the regular army and become supreme commander of them all. Hitler himself felt compelled to act against the SA. ...read more.

they would join "Hitler Youth" until the age of 18, Nazis aim was to create a new generation that could be used in the future wars. One of the member later said "we were politically programmed". Young people could have different opinions about this movements but they did not have a choice, their parents had to send them there or the Gestapo (Nazi secret police) could intervene severely on them. Young people could have liked these movement because they could have meet new teenagers like them but on the other hand it must have been unsupportable for youth to do the same "routine" every day. There is no discussion the way Trade Unionist and left-wing political leaders felt towards the Nazis during 1933-1939:hate. Trade unions has been banned in 1933, the trade unionists lost their jobs. Nazis tried to win the support of the manual workers. The political parties leaders were killed or sent to concentration camps. Teachers, lawyer and doctors although some of them were Nazi believers, there were others anti-Nazis but they always acted like they had Nazi idea because of the concentration camps fear. Lastly it can be said the Nazis oppressed people making Germans believe they were doing a great job for the country and taking the freedom from people to express themselves. As a witness describes it: "You had to praise Hitler or taking a risk". MOHAMED OMAR ...read more.