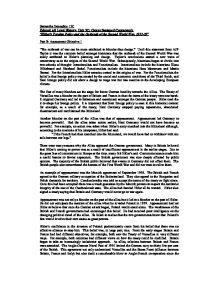 &quot;Hitler's Foreign Policy and the Outbreak of the Second World War, 1933-39&quot;

Samantha Donoghue 12C Edexcel AS Level History. Unit 3C: Centre Designed Coursework "Hitler's Foreign Policy and the Outbreak of the Second World War, 1933-39" Part B: Assessment Objective 1 "The outbreak of war can be more attributed to blunder than design." Until this statement from AJP Taylor it was the common belief amongst historians that the outbreak of the Second World War was solely attributed to Hitler's planning and design. Taylor's conclusions started a new wave of controversy as to the origins of the Second World War. Subsequently, historians began to divide into two schools of thought: Intentionalists and Functionalists. Intentionalists include the historians Klaus Hildebrand and Eberhard J�ckel. Functionalists include the historians Hans Mommsen and Martin Brozat. For the Intentionalists Hitler remains central to the origins of war. For the Functionalists the belief is that foreign policy was created by the social and economic conditions of the Third Reich, and Nazi foreign policy did not show a design to wage war but was reactive to the developing European climate. The first of many blunders set the stage for future German hostility towards the Allies. The Treaty of Versailles was a blunder on the part of Britain and France in that the terms of the treaty were too harsh. It crippled Germany and led to bitterness and resentment amongst the German people. Hitler used the it to shape his foreign policy. It is important that Nazi foreign policy is seen in this historical context for example, as a result of the treaty, Nazi Germany stopped paying reparations, abandoned disarmament and remilitarised the Rhineland. ...read more.

France seemed prepared to offer Italy a free hand in the takeover of Abysinnia whilst Britain was not. This divided the allies and gave Italy confused messages as to what the reaction of the allies would be. Italy took the information it had received as a green light and in October 1935, Mussolini invaded Abysinnia. As a reaction to this, Britain and France imposed half-hearted sanctions on Italy. The sanctions were sufficient to cause some difficulty to the Italian economy and considerable irritation to Mussolini. Hitler used this as an opportunity to re-militarise the Rhineland and Italy became increasingly closer to Germany, signing the Rome-Berlin axis in 1936. This incident severely damaged the credibility of the League of Nations as it was unable to help Abyssinia due to it having no army. It marked the end of the league as an effective organisation. Another blunder on the part of Britain and France was their relations with the Soviet Union. The Soviet Union had been excluded from the Munich agreement as France and Britain were not willing to form alliances with a communist state due to their fear of the spread of communism throughout Europe. If war were to come with Germany, western military experts did not place much value on any help from the Soviet Red Army. Faced with the prospect of further Nazi expansion, the British and French opened cautious negotiations with the Soviets. The Western powers gave remarkably low priority to these negotiations. ...read more.

This was an economic plan to develop Germany's industries, in particular, armaments and the basic industries on which armament production depended. This plan would make Germany ready to wage war by 1940. The document also spoke of the need for Germany to become self-sufficient showing that Hitler also wanted the German economy to be fit for war. By increasing the pace of re-armament, Hitler had started an arms race and it became apparent that, due to Germany's comparative lack of resources, it was a race that he was not going to win if it went on for any length of time. History contains evidence for both planning and blunders. Both 'Mein Kampf' and the Hossbach Memorandum show Hitler's intentions to use force if necessary. Taking into consideration the controversy surrounding these sources, I would say that they still portray an accurate picture of Hitler's state of mind, and that it was always Hitler's intention to wage war however inaccurate the detail in these sources. A series of blunders and misjudgements on the parts of both the allies and Germany ultimately led to war but these would not have occurred if Germany had not been pushing for a war. However, this series of blunders did push Hitler into the kind of war he did not want, for example: the four year plan stated that Germany would be ready for war in 1940 although war broke out in 1939; Mein Kampf stated that Hitler wanted Britain as an ally but Hitler, in reality ended up at war with Britain. In conclusion, I would say that a series of blunders led to a different war than Hitler had planned for. ...read more.