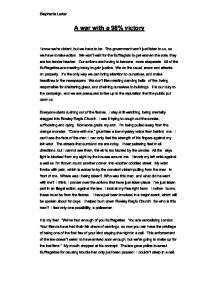 A war with a 98% victory I know we're violent, but we have to be. The government won't just listen to us, so we have to take action. We won't wait for the Suffragists to get women the vote, they are too tender hearted. Our actions are having to become more desperate. All of the Suffragettes are meeting today to gain justice. We do the usual, arson and attacks on property. It's the only way we can bring attention to ourselves, and make headlines in the newspapers. We don't like creating dancing balls of fire, being responsible for shattering glass, and chaining ourselves to buildings. It is our duty to the campaign, and we are pressured to live up to the reputation that the public put upon us. Everyone starts rushing out of the flames. I stay still watching, being mentally dragged into Rowley Regis Church. I see it trying to cough out the smoke, suffocating and dying. Someone grabs my arm. I'm being pulled away from the orange monster. "Come with me," grumbles a low mystery voice from behind me. I can't see the face of the man; I can only feel the strength of his fingers against my left wrist. ...read more.

It doesn't happen. Surely they haven't given up after two days of giving me this torture. No one comes, not until now. The door to my cell slowly opens, as if the person is acting cautiously. I'm not dangerous! It is neither a nurse nor a visitor; it's a middle aged, stern faced man holding one key. "You can go," he announced. I can't believe it; they're letting me go! I must have made an impact. I claim my clothes and return my blood stained gown. I am free. I stride out of the hell house, and wander the streets I had walked a few days ago. I pass the church, but it is no longer a church. It is now a distant memory, and a burnt fossil. I turn a corner, I see the children playing once again as usual. I cross the street, and then presented with my front door. I turn the handle, slowly with my fingertips, which are frozen from the chilly morning air. "You did it, you made the papers!" said a voice. I stand amazed; I'm in the papers? Why did that happen? ...read more.

My happiness is suddenly taken over by the desperation to get to the front. I can't see my friends joyful face, but I can see her motionless on the floor. I believe she is in shock, but as I draw closer to her body, I see a fresh stream of blood surrounding her head. The horse must have hit her when it fell! She's gone! After all we had done, that she had done, that horse didn't carry on the race! Why would it not do what all the others had? Why did it have to be different? It killed my friend! I wish I could tell her the good news, the fact that she succeeded on placing the banner. I would wish not to tell her the bad news that she is not asleep, and will not be coming back to everyday life. Again, I see thousands of Suffragettes. Not this time at the Derby, but at Emily Davison's funeral. So many more people now admire her, and now everyone knows who she is and her cause. The government now has to listen and consider giving women the vote. They have to, now someone has died for their cause. We are one step further. We still do not have the vote, but that won't stop us from trying. ?? ?? ?? ?? Stephanie Larter ...read more.