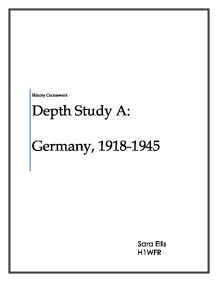 History Coursework Depth Study A: Germany, 1918-1945 Sara Ellis H1WFR Assignment A: 1. Choose any one reason from the list and explain how it contributed to Hitler's rise to power. There were many factors that contributed to Hitler's rise to power. One of the main factors was the Munich Putsch in 1923. The Munich Putsch was a Nazi rebellion led by Hitler against the Weimar Republic. Hitler followed Mussolini's example of marching to Rome and over taking over the government of Italy. The leaders of the right-wing government in Bavaria, Gustav von Kahr, Otto von Lossow and Hans Seisser were planning to help Hitler rebel. However, on November 4th, they called off the rebellion. Hitler hoped that the Munich Putsch would force people, such as Kahr, Lossow and Seisser, to support the Nazis. On the night of November 8th in 1923, Hitler marched 600 storm troopers into the Munich Beer Hall and interrupted the meeting chaired by Kahr, Lossow and Seisser. The storm troopers took over the army headquarters and the local newspaper. Hitler pointed a gun at them and forced them to support the revolt. After the leaders reluctantly agreed to support the Nazis party, Kahr secretly called the police and army reinforcements. On the 9th, the Nazis marched in Munich and began their rebellion. However, they were stopped by the police in Residenzstrasse. The events of the Munich Putsch affected Hitler's rise to power in both a negative and positive way. After the failure of the Putsch, the Nazis were defeated. Sixteen Nazis were shot dead by the police, their leaders were arrested and the Nazi party was banned. Hitler hid and fled but was caught two days later. He was arrested and put on trial for treason. Also, he was forbidden from speaking in public until 1927. Hitler was put in jail for nine months and released in early September, 1924 because of his good behavior in prison. ...read more.

Hitler's ideas were becoming increasingly popular in Germany, his reputation was overpowering the control of President Hindenburg and Chancellor at the time, Franz von Papen. This was a powerful catalyst that accelerated Hitler's rise to power. Another short-term catalyst was the Enabling Act passed on March 23rd, 1933. After giving an influential speech which convinced the Reichstag that Germany was in danger from the Communists, Jews and others, Hitler introduced the Enabling Act to allegedly control dissenting groups and keep Germany safe. The Enabling Act included terms which prohibited free speech, press and other personal freedoms for all German people. The police were allowed to search houses, confiscate property and arrest without trial. This act gave Hitler all the power he needed over his people, he could keep hold of those who opposed him and manipulate more people to his side. The Enabling Act would not have been possible if Hindenburg and Von Papen hadn't appointed Hitler as chancellor earlier in the year. The approval of the Reichstag of the Enabling Act was the final touch for Hitler to gain absolute power and dictatorship. With full control of the German government and no threat of dissent, Hitler marched the world into war. In conclusion, both short-term and long-term effects were necessary to Hitler's rise to power. They are all linked to one another and if any factor did not occur, there is a great possibility that Hitler would have failed to have risen to power. 3. Were any of these reasons more important than the others in Hitler's rise to power? Explain your answer. All the reasons contributed greatly to Hitler's rise to power. In my opinion, Hitler's oratory skills, personality and leadership were the main reason he achieved his position. However, without many of the other factors, it would not have been possible for Hitler to come to power. The signing of the Treaty of Versailles was the beginning of Hitler's hatred towards to Weimar Republic. ...read more.

Hitler ensnared the German people, as a Hamburg school teacher recalls, "[Many] look up to [Hitler] with touching faith, as their helper, their saviour, their deliverer from unbearable distress." His oratory excellence, personality and leadership led to his gain in reputation with the German people. This led to the decision of Papen and Hindenburg to appoint him as Chancellor of Germany in 1933. Once he got into power he used violence to dispose of his enemies. He ordered the Nazis to murder Communists and Socialists; destroyed shops owned by Jews and closed democratically owned newspapers. This aggression not only got rid of enemies but also scared people into voting for the Nazi party. This violent personality was not approved of by many but worked effectively in grabbing power. One report by the British Ambassador in Berlin said in 1932: "...there were between 1 June and 20 July in Prussia alone, excluding Berlin, 322 serious clashes, involving 72 deaths and 497 injured... Prominent Socialists and Communists were surprised at night and murdered in their own beds or shot down at the doors of their houses. The windows of shops owned by Jews were smashed and the contents looted. There were attacks with high explosives on the offices of democratically owned newspapers. The assailants used firearms, hand grenades and acid." From these statistics, it is clear that Hitler and the Nazis use aggression, which evolved murdering, to eliminate all competitors and gain power. In conclusion, all the points contributed to Hitler's rise to power in various ways. Hitler's rise to power would be altered and may not even succeed if any of the factors didn't occur. For example, without the Treaty of Versailles, Hitler would not have been so enraged towards the Weimar Republic and would probably not have planned the Munich Putsch. Every factor played its own contributory part, however, I believe Hitler's oratory skills, personality and leadership were the most important factors in his rise to power. ...read more.