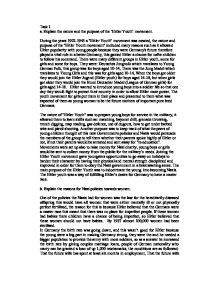 Task 1 a. Explain the nature and the purpose of the 'Hitler Youth' movement. During the years 1922-1945 a "Hitler Youth" movement was created, the nature and purpose of the "Hitler Youth movement" included many reasons such as it allowed Hitler popularity with young people because they were Germany's future therefore played a vital role in a better Germany, this gained Hitler a chance for na�ve children to follow his command. There were many different groups in Hitler youth, some for girls and some for boys. They were: Deutsches Jungvolk which translates to Young German Folk, this group was for boys aged 10-14, There was the Jung Madel which translates to Young Girls and this was for girls aged 10-14, When the boys got older they would join the Hitler Jugend (Hitler youth) ...read more.

Another purpose was to keep track of what the peers of young children thought of this new Governments policies and Nazis would persuade the members of the group to tell them whether their parents spoke highly of Hitler or not, if not their parents would be arrested and sent away for "re-education". Movements were set up also to raise money for Nazi charity, young boys or girls would be sent to collect money from the public for the military's needs. Joining the Hitler Youth movement gave youngsters opportunities to go away on holidays to harden their character by having their physical and mental strength disciplined and improved in order for them to obey the Nazi government in a brainwashing sense. ...read more.

as a answer he increased the birth rate by giving couples marriage loans, people of German nationality who marry can be granted a loan of up 1,000 reichsmarks, the conditions are as followed: That the future wife has spent at least six months in employment, That the future wife gives up her job, That the future wife promises not to take up employment so long as her future husband earns more than 125 reichmarks a month. But to increase the birth rate couples had to have children, Hitler encouraged people to have children by cutting the loan by a quarter for having a baby after the loan, if they had another second child it would be cut by half, and after four children they would owe nothing, this was a clever way of getting people to have more children. ...read more.