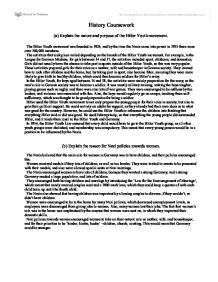 (a) Explain the nature and purpose of the Hitler Youth movement.

The activities that took place varied depending on the branch of the Hitler Youth movement. For example, in the League for German Maidens, for girls between 14 and 17, the activities included sport, childcare, and domestics. Girls did not usually have the chance to take part in sports outside of the Hitler Youth, so this was very popular. These activities prepared girls for their roles as a mother, wife and housekeeper in German society. They learned how to look after children and the home, but, by taking part in sport, also became fitter, meaning they were more likely to give birth to healthy children, which could then become soldiers for Hitler’s army.

In the Hitler Youth, for boys aged between 14 and 18, the activities were mainly preparation for the army, as the men’s role in German society was to become a soldier. It was mostly military training, making the boys tougher, playing games such as rugby, and there were also lots of war games. They were encouraged to be ruthless by the leaders, and violence was associated with fun. Also, the boys would regularly go on camps, teaching them self-sufficiency, which was thought to be good preparation for being a soldier.

Hitler used the Hitler Youth movement to not only prepare the young people for their roles in society, but also to gain their political support. He could not rely on adults for support, as they already had their own ideas as to what was good for the country. However, he could use the Hitler Youth to influence the children into thinking that everything Hitler said or did was good. He used Fuhrerprincip, so that everything the young people did surrounded Hitler, and it made them loyal to the Hitler Youth and Germany.

(b) Explain the reason for Nazi policies towards women.

The Nazis believed that the main role for women in Germany was to have children, and their policies encouraged this.

Women received medals if they lots of children, as well as tax breaks. They were invited to events to be presented with their medals, and also were allowed special seats at Nazi meetings.

They encouraged both having children and marriage by introducing the ‘Law for the Encouragement of Marriage’, which meant that newly married couples received a 1000 mark loan, which they could keep a quarter of with each child born, up until the fourth child.

The Nazis also showed that having children was important by allowing couples to divorce, if they couldn’t, or didn’t have children.

Women were encouraged to be in the home by many Nazi policies, which decreased unemployment levels, as employers were discouraged from giving jobs to women. Also, many women lost their jobs. The fact that women’s role was in the home was emphasised by the courses that women were sent on, in which they improved their domestic skills.

Nazi policies towards women encouraged women to take on their natural role as mother, wife, and housekeeper, and for their priorities to be ‘kinder, kirche, kuche’ –children, church, cooking. This would mean that Germany could be stronger.

(c) ‘The most important reason why there was little opposition in Germany towards the Nazi regime was its use of propaganda’. Explain how far you agree with this statement.

The Nazis used several forms of propaganda to gain control of Germany. All German newspapers were controlled by Goebbels, and all anti-Nazi newspapers were closed, so that people could not read anything against the Nazis. The film industry was also controlled with political pro-Nazi films that cinema-goers had to watch, along with films portraying Nazi enemies in a negative light. Radio was also controlled, with restrictions to stop the