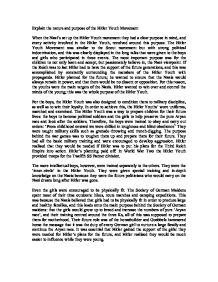 Explain the nature and purpose of the Hitler Youth Movement

When the Nazi’s set up the Hitler Youth movement they had a clear purpose in mind, and every activity involved in the Hitler Youth, revolved around this purpose. The Hitler Youth Movement was similar to the Scout movement but with strong political indoctrination, and this was clearly displayed in the long talks that were given to the boys and girls who participated in these events. The most important purpose was for the children to not only learn and accept, but passionately believe in, the Nazi viewpoint. If the Reich was to last Hitler had to have the support of the future generations, and this was accomplished by constantly surrounding the members of the Hitler Youth with propaganda. Hitler planned for the future; he wanted to ensure that the Nazis would always remain in power, and that there would be no dissent or opposition. For this reason, the youths were the main targets of the Nazis. Hitler wanted to win over and control the minds of the young; this was the whole purpose of the Hitler Youth.

For the boys, the Hitler Youth was also designed to condition them to military discipline, as well as to win their loyalty. In order to achieve this, the Hitler Youths’ wore uniforms, marched and exercised. The Hitler Youth was a way to prepare children for their future lives: the boys to become political soldiers and the girls to help preserve the pure Aryan race and look after the soldiers. Therefore, the boys were trained to obey and carry out orders: ‘From childhood onward we were drilled in toughness and blind obedience1. They were taught military skills such as grenade-throwing and trench-digging. The purpose behind the war games was to toughen them up and prepare them for their future. They had all the basic military training and were encouraged to develop aggression. Hitler realised that they would be needed if Hitler was to put his plans for the Third Reich Empire into action. Hitler’s planning paid off: in World War Two the Hitler Youth provided troops for the Twelfth SS Panzer division.

The more intellectual boys, however, were trained separately to the others. They were the ‘inner-circle’ in the Hitler Youth. They were given special training and in-depth knowledge on the Nazis because they were the future politicians who would carry on the Nazi dream long after Hitler was gone.

Even the girls were encouraged to be physically fit. The Society of German Maidens spent most of their time outdoors: hikes, route marches and camping expeditions. This was because the Nazis believed that girls had to be physically fit in order to produce large and healthy families, and this leads onto the main purpose behind the Society of German maidens: that the girls would grow up to breed and increase the numbers of pure ‘Aryan race’, and their training centred around the three Ks, all of this was supposed to prepare them for motherhood. Their future role was of the homebuilder and Goebbels hammered home the message that it was the duty of every German girl to nurture a large family and continue the Aryan race. It was essential that Hitler gained the support of the girls: they were needed for Hitler’s plans for the future, and Hitler realised they would be much easier to influence while they were young.