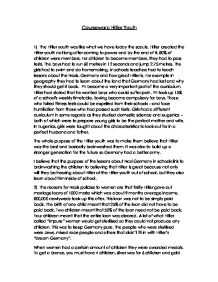 Coursework: Hitler Youth 1) The Hitler youth was like what we have today the scouts. Hitler created the Hitler youth not long after coming to power and by the end of it, 80% of children were members. For children to become members, they had to pass tests. The boys had to run 60 metres in 12 seconds and jump 2.75 metres. The girls had to swim and do homemaking. In schools teachers had to teach lessons about the Nazis, Germany and how great Hitler is. For example in geography they had to learn about the land that Germany had lost and why they should get it back. PE became a very important part of the curriculum. Hitler had stated that he wanted boys who could suffer pain. PE took up 15% of a school's weekly timetable. Boxing became compulsory for boys. Those who failed fitness tests could be expelled from their schools - and face humiliation from those who had passed such tests. ...read more.

800,000 newlyweds took up this offer. This loan was not to be simply paid back. The birth of one child meant that 25% of the loan did not have to be paid back. Two children meant that 50% of the loan need not be paid back. Four children meant that the entire loan was cleared. A lot of what Hitler called "impure" women would get sterilised so they could not produce any children. This was to keep Germany pure. The people who were sterilised were Jews, mixed race people and others that didn't fit in with Hitler's "dream Germany". When women had a certain amount of children they were awarded medals. To get a bronze, you must have 4 children, silver was for 6 children and gold medal was awarded for 8 kids. These medals were created to encourage women to produce more children and because they could only have children if they were pure Germans and were fit, then this meant they would have been stronger to fight for Germany. ...read more.

Along with running informants and block wardens to keep an eye out on what Himmler could not see, Himmler made Nazi Germany a nasty place to be if you done anything against them. The final factor was run mostly by Hitler but with others too, this factor was employment. Hitler controlled who was employed and who was not. He took some women of the employment register, this was for two reasons, firstly to make room for men, and secondly to make women stay at home and raise a family. He also took a lot of Jews of the employment register. Men also had to do at least two years of national service in the army. By giving men more jobs, he got their vote. I think that the most important factor is also the most extreme, control by terror. I think this because if Himmler has killed all of Hitler's opposition then who's going to vote him out? And running the police and courts meant he could do anything. ...read more.