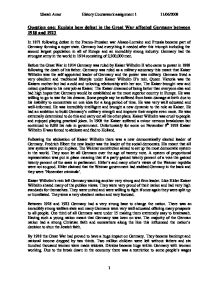 Question one: Explain how defeat in the Great War affected Germany between 1918 and 1923 In 1871 following defeat in the Franco-Prussian war Alsace-Lorraine and Prussia became part of Germany forming a super state. Germany had everything it needed after this triumph including the second largest population in all of Europe and an incredibly strong industry. Germany had the strongest army in the world in 1914 consisting of 2,200,000 men. Before the Great War in 1914 Germany was ruled by Kaiser Wilhelm II who came to power in 1888 following the death of his father. Germany was ruled as a military autocracy this meant that Kaiser Wilhelm was the self appointed leader of Germany and the power was military. Germans lived a very obedient and traditional lifestyle under Kaiser Wilhelm II's rein. Queen Victoria was the Kaisers mother but had a cold and unloving relationship with her son. The Kaiser brought new and mixed qualities to his new job as Kaiser. The Kaiser dreamed of being better than everyone else and had high hopes that Germany would be established as the most superior country in Europe. He was willing to go to war for his dreams. Some people say he suffered from brain damage at birth due to his inability to concentrate on one idea for a long period of time. He was very well educated and well-informed. He was incredibly intelligent and brought a new dynamic to the role as Kaiser. He had an ambition to build Germany's military strength and improve their empire even more. He was extremely determined to do this and carry out all his other plans. Kaiser Wilhelm was cruel to people and enjoyed playing practical jokes. In 1908 the Kaiser suffered a minor nervous breakdown but continued to fulfil his role in government. Unfortunately for some on November 9th 1918 Kaiser Wilhelm II was forced to abdicate and fled to Holland. ...read more.

He became incredibly good at brainwashing his crowd using repetition. He repeated his key ideas in so many different ways that the vulnerable German's actually mistook them for new and better ideas. He was an ordinary man that was able to get through to stupid people but with such an incredible passion for his beliefs. In 1929 Hitler used the Economic Depression to his advantage. Due to the war and the Treaty of Versailles Germans at the time hated the Weimar Government. Unfortunately whatever government came to power at this time would have had more or less the same problems because the government were forced to sign the Treaty and deal with the crisis that followed. The Economic crisis at the time did not help their situation as they did not deal with it in the best way that they could have. The Chancellor made a wrong move and drove people to hate the government even more when he cut wages but increased taxes. He also reduced unemployment benefits. This led to the Weimar government being blamed for the economic crisis. Being one of the most democratic governments in the world at the time the Weimar Republic did not take the same shape as the previous Kaiser as in the way they made decisions. Unlike the Kaiser they were not forceful or firm in their decisions, this did not bode well for the government. In 1930 Article 48 was put in place this meant that the president at the time were able to pass new laws with out consulting the parliament. This had a negative cohesion on the German Democracy. Violence was brought upon the nation derived from the Germans bitterness towards the feeble handling of the economic crisis by the Weimar Constitution. All this contributed to Hitler's rise to power. The Nazi's saw this as the perfect opportunity to show their campaign. Hitler was given the chance to prove himself by showing his oratory skills and the Germans took an instant liking to him due to the fact that Hitler was incredibly like the Kaiser. ...read more.

The economic crisis helped the Nazi party greatly and Germany's fear of communism also helped Hitler along the way. Hitler's personality also plays a massive role in his rise to power. His organisation over the Nazi party was key, he was incredibly good at getting funding for his campaigns, he kept discipline within the party and the S.A all had the same perfect uniforms and stood united. Hitler held very strong leadership skills. He always entered the hall from the back to show he was speaking from the people; he created a strong atmosphere at his meetings incorporating a ten minute silence at the beginning of a speech to show his authority. Hitler had the loudest voice in history and this caught people's attention. He was seen as the leader of a religion, he had brainwashed many people. Hitler repeated his ideas in so many different ways that people believed they were different and better. In conclusion I feel that Hitler was amazingly successful in his achievement of power. He had a great deal of coincidental factors like the economic depression to help him along the way but without them he may have been just as powerful due to his determination and fantastic leadership skills. I think that the most important factors in Hitler's achievement of power were World War One and the Treaty of Versailles. Hitler was incredibly lucky that the Weimar Republic were so weak. I think that the Munich Putsch was absolutely vital for Hitler's rise to power and I believe that he learnt a lot about leadership and was able to make such great elaborate for Germany's future from the time he served. I feel that Hitler was remarkably determined to become President/ a dictator of Germany and he succeeded. All in all I think all both long term and short term factors played a huge role in Hitler's achievement of power and he was a very strong leader. ?? ?? ?? ?? 1Sarah Amor History Coursework assignment 1 11/06/2008 1 ...read more.