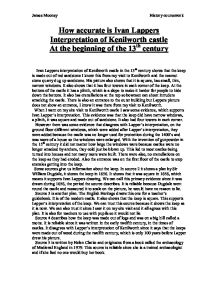 How accurate is Ivan Lappers Interpretation of Kenilworth castle At the beginning of the 13th century.

How accurate is Ivan Lappers Interpretation of Kenilworth castle At the beginning of the 13th century Ivan Lappers interpretation of Kenilworth castle in the 13th century shows that the keep is made out of red sandstone I know this from my visit to Kenilworth and the nearest stone quarry dug up sandstone. His picture also shows that it is square, has small, thin, narrow windows. It also shows that it has four towers in each corner of the keep. At the bottom of the castle it has a plinth, which is a slope to make it harder for people to hide down the bottom. It also has crenellations at the top so bowmen can shoot intruders attacking the castle. There is also an entrance to the outer building but Lappers picture does not show an entrance, I know it was there from my visit to Kenilworth. When I went on my site visit to Kenilworth castle I saw some evidence, which supports Ivan Lapper's interpretation. This evidence was that the keep did have narrow windows, a plinth, it was square and made out of sandstone. It also had four towers in each corner. However there was some evidence that disagrees with Lapper's interpretation, on the ground floor different windows, which were added after Lapper's interpretation, they were added because the castle was no longer used for protection during the 1400's and was more of a house so the windows were enlarged. ...read more.

This made castles harder to attack and enemies had to think of new ways of attack. The moat Ivan Lapper's interpretation of the moat is that it was big almost the size surrounded the castle. Source 2 is a plan of the castle. It shows that the moat was big and surrounded the castle. It is reliable since it was drawn by sir William Dugdale who was there at that time. He went round the castle and measured it and drew it to scale. He also had no reason to lie. In the picture it shows that the moat was almost the same size as a lake. The disagreement is that it was drawn 300 years after Lappers, which brings its reliability into question. Source 3 is another plan but a modern twentieth century one. It shows the moat going all round the castle. It was from the teacher's guidebook. So they wouldn't lie about what it says or people wouldn't buy it. Also teachers need the books to be reliable, as they have to use them to teach children. Source 7 is an extract about a siege on Kenilworth in 1272. It tells us that the mere (moat) was very long. We cannot tell if it reliable or not since they might have just exaggerated a little about the size to make Lord Edwards son seem more heroic it is a primary source since it was written around the time we are studying. ...read more.

It shows the inner curtain wall going around the keep. It also shows that the outer curtain wall goes to the very edge next to the moat. It is reliable since it was drawn to scale and Dug-dale would have no reason to lie. Source 3 is another plan but a more modern one. It is from English Heritage and shows that parts of the wall are gone. Ti also shows various watchtowers, on the outer curtain wall. The source is reliable since English Heritage wants to sell copies of its books so they would want to make it as truthful as possible. Source 6 is an extract from a book by Helen Clarke who is a trained archaeologist the extract states that the curtain walls were added in the 12th century. Kenilworth was a typical 13th century castle so it probably had its curtain wall at the same time. It also states that they had square towers, which eventually got turned circular ones due to the fact that square towers had weak right angles and circular towers didn't. The square corners on the towers made it easier for attackers to demolish the wall as they shot at the corners and the wall would fall down. As castles developed, castle builders realized that circular towers were better as they were not so easy to attack. This probably why Kenilworth castle's towers changed. This agrees with Lappers interpretation of the curtain wall. It reliable since Helen Clarke would want to sell copies of her books so she would not lie. James Mooney History coursework ...read more.