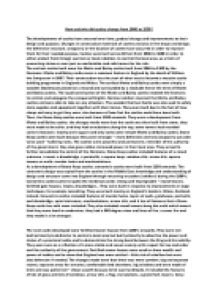 ﻿How and why did castles change from 1066 to 1550? The developments of castles have occured over time, gradual change and improvements to their design and purpose. Changes in construction materials of castles and also in the shape and design, the defensive structure, weaponry or the location of castles have occurred in order to improve them for their needed purpose. Castles were built across Britain from 1066 to 1600 in order to either protect from foreign warriors or local rebellion, to control the local area, as a form of presenting status or even just as comfortable and safe homes for the rich. The earliest castles built were the Motte and Bailey castles built from 1066 to 1100 by the Normans. Motte and Bailey castles were a common feature in England by the death of William the Conqueror in 1087. Their construction was the start of what was to become a massive castle building programme in England and Wales. ...read more.

The castles were powerful and permanent, reminder of the authority of the government, they also gave nobles increased power in their local area. They served to further consolidate the control of the Normans. Stone Keep castles included features of a raised entrance, a moat, a drawbridge, a portcullis, a square keep, window slits, arrow slits, square towers on walls, murder holes and machicolations. As a development of Stone Keep castles, concentric castles were built from 1250 onwards. The concentric design was copied from the castles in the Middle East; knowledge and understanding of design and structure came into England through returning crusaders (soldiers) during the 1200?s. Concentric castles came to typify the medieval castle; strong and impregnable ? round towers, fortified gate houses, moats, drawbridges? They were built in response to improvements in siege techniques, for example tunnelling. They were built mainly on England?s borders; Wales, Scotland, Ireland. Concentric castles included features of murder holes, layers of walls, gatehouse, portcullis and drawbridge, spiral staircases, machicolations, arrow slits, and it has all features that a Stone Keep castle has with more included. ...read more.

It included the features of lots of glass and lots of windows, arrow slits, a flag, crenulations, a grand hall, towers, fancy features - chimneys, oriel windows, heraldic crests and the location was on an existing castle site. More of a development of concentric castles than the fortified manor house was coastal castles made from the 1530?s onwards. They were built for a specific purpose during 1530?s by Henry VIII; namely the defence of England?s southern coastline from the possibility of an invasion launched by Spain and France. The unique clover/petal design was designed to site the new weapon of the 1500?s ? the cannon. Coastal castles included the features of thick and layered but low stone walls, round towers, gun ports, cannon ports, may have had a moat, was one big tower design ? no separate towers, pointed bastions and were located by the coast. Examples of coastal castles ? Deal castle in Kent which was built in 1530 and St. Mawes castle in Cornwall which was built in 1535. By Immi Pearce 10J ...read more.