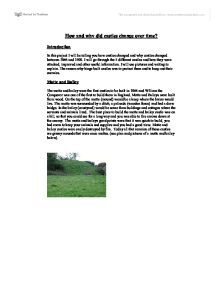 How and why did castles change over time?

How and why did castles change over time? Introduction In this project I will be telling you how castles changed and why castles changed between 1066 and 1500. I will go through the 5 different castles and how they were attacked, improved and other useful information. I will use pictures and writing to explain. The reason why kings built castles was to protect them and to keep out their enemies. Motte and Bailey The motte and bailey were the first castles to be built in 1066 and William the Conqueror was one of the first to build them in England. Motte and Baileys were built from wood. On the top of the motte (mound) would be a keep where the baron would live. The motte was surrounded by a ditch, a palisade (wooden fence) and had a draw bridge. In the bailey (courtyard) would be some farm buildings and cottages where the servants and animals lived. The best place to build the motte and bailey castle was on a hill, so that you could see for a long way and you was able to fire arrows down at the enemy. ...read more.

Edward I The round keep was better than the square keep because all round vision was possible, tunnellers couldn't destroy it as it had round corners, the walls were thicker at the base and the towers leant over the wall so objects could be dropped on the enemy.(see plan of keep castle below). At this time siege and powerful long range weapons were made e.g. the mangonel and the trebuchet. The mangonel was a catapult that fired a number of heavy rocks in one go and was powered by the tension of ropes. It was however difficult to aim. (see picture). The trebuchet was very accurate. It fired one heavy rock at a time. The rock was placed on the trebuchet arm which knocked into the rope and sprung off at great speed. (see picture). Siege towers were developed to help attackers climb high walls. The siege tower was covered in thick leather to give protection to the attackers. Heavy battering rams were used to try and destroy the castle walls. One successful method of attack was the siege. ...read more.

It was hard to destroy these castles with the weapons described above. Edward I built many of these castles in Wales at the end of the 13th century. (see picture of Beaumaris castle on Anglesea built in 1295 and the plan of a concentric castle below). Platform Castles King Henry VIII built the last castles in 1500. He built most of them along the English coast as he feared that the French might invade. This castle could not be destroyed by any weapons. It had many defences to withstand gunpowder. It had a very small entrance, the towers were built below the outer walls so that cannon balls would not hit it with power, the walls were 5 metres thick and the clover leaf shape could absorb cannon balls. These castles were very difficult to attack. They were defended by revolving cannons on their roofs. The only disadvantage was these castles were very dark and uncomfortable inside. Examples of this castle are Deal Castle (below),Walmer Castle and Sandown Castle. Conclusion The reason castles changed overtime was because weaponary was getting more advanced so kings had to make stronger and larger castles which would withstand powerful weaponary (especially gunpowder). ?? ?? ?? ?? ...read more.