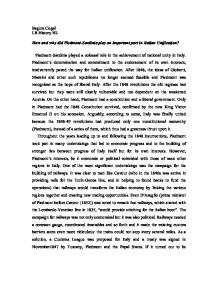 Begum Cogal I.B History HL How and why did Piedmont-Sardinia play an important part in Italian Unification? Piedmont-Sardinia played a colossal role in the achievement of national unity in Italy. Piedmont's determination and commitment to the endorsement of its own interests, inadvertently paved the way for Italian unification. After 1848, the ideas of Gioberti, Mazzini and other such republicans no longer seemed feasible and Piedmont was recognized as the hope of liberal Italy. After the 1848 revolutions the old regimes had survived but they were still clearly vulnerable and too dependent on the weakened Austria. On the other hand, Piedmont had a constitution and a liberal government. Only in Piedmont had the 1848 Constitution survived, confirmed by the new King Victor Emanuel II on his accession. Arguably, according to some, Italy was finally united because the 1848-49 revolutions had produced only one constitutional monarchy (Piedmont), instead of a series of them, which thus had a greatness thrust upon it. Throughout the years leading up to and following the 1848 insurrections, Piedmont took part in many undertakings that led to economic progress and to the building of stronger ties between progress of Italy itself but for its own interests. However, Piedmont's interests, be it economic or political coincided with those of most other regions in Italy. One of the most significant undertakings was the campaign for the building of railways. ...read more.

As mentioned previously after the 1848 revolts, Piedmont remained the only Italian state where the liberal constitution survived. Piedmont was the only state, which had an army capable of fighting the Austrians, and in Victor Emanuel II it possessed a leader willing to continue the struggle against Austria. As a result of this, many people who were keen on seeing Italy independent and political exiles were attracted to Piedmont. Finally in 1855-56, these circumstances gave rise to the Italian National Society. The Society had a direct political role. It was committed to the cause of Italian independence and supporting Victor Emanuel and Piedmont in that cause. It was a very effective instrument in the hands of an ambitious politician like Cavour. Cavour used the Society to stir up revolts all over Italy while allowing the government of Piedmont to deny any responsibility. The Italian National Society continued to encourage and participate in revolts throughout the late 1850s in its own name but it was done with the support of the government of Piedmont-Sardinia. The foreign policies of Piedmont played an even more important role in the unification of Italy. Once again, their policies were aimed at promoting their own interests, but at the same time they served to bring Italy closer to unification. Piedmont wanted independence of Austria and to expand its power with the acquisition of Lombardy and Venetia. ...read more.

Victor Emmanuel was forced to sign the armistice because the Piedmontese army would be unable to conquer the Austrians without the aid of the French. However, there was a lot of discontent in central Italy about the new provisional governments and in 1960, Cavour (who had resigned following the signing of the armistice by Victor Emanuel) was reinstalled Prime Minister and he made an agreement with France that if Tuscany and the other central Italian states voted in favor of annexation, they would become a part of Piedmont and in return France would gain Nice and Savoy. This agreement was embodied in the Treaty of Turin, which was signed in March. The plebiscites were carefully managed by the Italian National Society who made sure that they gave the right results in favor of annexations in central Italy as well as in Nice and Savoy. This resulted in Piedmont possessing a larger kingdom than that had been anticipated. Even though it was not the original intention, through the successful foreign policy of Piedmont, the enlargement of the existing Piedmont-Sardinia was made possible and thus a northern unified Italy was created and this was the most major step to the unification of Italy. Piedmont was only interested in increasing its power and influence and in promoting its own interest. However, the interests of Piedmont-Sardinia coincided with those of a united Italy. Piedmont's determination to continue the struggle for independence and its resistance to Austrian control combined with its effective domestic and foreign policies allowed for it to form the foundation for the unification of Italy, ...read more.