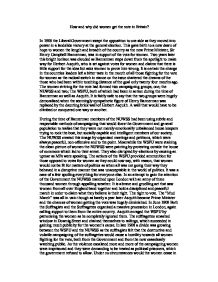 How and why did women get the vote in Britain?

How and why did women get the vote in Britain? In 1906 the Liberal Government swept the opposition to one side as they moved into power in a landslide victory at the general election. This gave birth to a new dawn of hope to women the length and breadth of the country as the new Prime Minister, Sir Henry Campbell Bannerman, was in support of the vote for women. Two years later this bright horizon was clouded as Bannerman steps down from the spotlight to make way for Herbert Asquith, who is set against votes for women and claims that there is little support for the idea but asks women to prove him wrong. It is certain the change in the countries leaders left a bitter taste in the mouth of all those fighting for the vote for women as the radical switch in stance on the issue shattered the dreams of the those who had been within touching distance of the goal only twenty four mouths ago. The women striving for the vote had formed two campaigning groups, one; the NUWSS and two; The WSPU, both of which had been in action during the time of Bannerman as well as Asquith. It is fairly safe to say that the two groups were hugely demoralised when the seemingly sympathetic figure of Henry Bannerman was replaced by the daunting brick wall of Herbert Asquith. ...read more.

Instead of being force-fed women were allowed to starve until they became so weak they had to be admitted to hospital, where they made a full recovery and were discharged, only to be re-arrested and go on hunger strike again. This continued until the women had served her full sentence in prison, the time spent in hospital was excluded from the sentence so a six-month jail sentence could last well over a year. This "Cat and Mouse" act was an effective way to deal with only one of the many problems that the Government faced but if Asquith thought that the violence, vandalism and self starvation had cased bad publicity for him then he had a shock in store. June 1913 saw Derby Day looking to be a complete success with a good crowed surrounding the racecourse. No one would have given Emily Davidson, a well dressed women waving her flags like all those around her, a second look but what she has about to do would send her down in history as a martyr. As the leading horses sped past, Emily ducked under the railings and moved into the middle of the track. Hundreds looked on, helpless, as Emily Davidson stood firm in front of non-other but the Kings horse and waved her flags as if they would some how protect her from the thundering hooves of the animal hurtling towards her at high speed. ...read more.

No matter how hard the women of the NUWSS tried, they could not keep a good image for women with the WSPU burning and bombing both public and private property. I also believe that, on its own, the peaceful campaign of the NUWSS would have won the right to vote eventually as they proved they could handle politics by being very well organised in their methods. Unfortunately members of the WSPU expected results far too quickly and their impatience led to them becoming violent and throwing away any chances of women getting the vote before the war. When Bannerman was Prime Minister women were very close to getting the vote as their peaceful methods only encouraged Bannerman to continue his support of them. Subsequently when Asquith became Prime Minister and the WSPU became viscous it looked forever unlikely that women would get the vote as he was gifted excuses to pass them off as just unstable women trying to cause trouble. However, when the war was drawing to a close and women had proven themselves capable of surviving in a mans world, Asquith was already well on his way to fully supporting women, so when the six month Bill was about to be passed and women jumped on the chance to have their argument taken to parliament, Asquith didn't want and didn't look for a reason to deny their request. The women got their fight to a higher level and finally won the right they so richly deserved, the right to vote. ...read more.