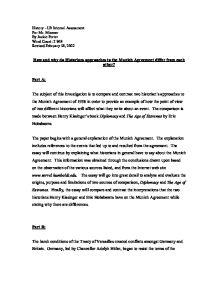 How and why do Historians approaches to the MunichAgreement differ from each other?

History - I.B Internal Assessment For Mr. Mizener By Jackie Porter Word Count: 2 968 Revised February 18, 2002 How and why do Historians approaches to the Munich Agreement differ from each other? Part A: The subject of this investigation is to compare and contrast two historian's approaches to the Munich Agreement of 1938 in order to provide an example of how the point of view of two different historians will affect what they write about an event. The comparison is made between Henry Kissinger's book Diplomacy and The Age of Extremes by Eric Hobsbawm. The paper begins with a general explanation of the Munich Agreement. The explanation includes references to the events that led up to and resulted from the agreement. The essay will continue by explaining what historians in general have to say about the Munich Agreement. This information was obtained through the conclusions drawn upon based on the observation of the various sources listed, and from the Internet web site www.sorrel.humboldt.edu. The essay will go into great detail to analyze and evaluate the origins, purpose and limitations of two sources of comparison, Diplomacy and The Age of Extremes. Finally, the essay will compare and contrast the interpretations that the two historians Henry Kissinger and Eric Hobsbawm have on the Munich Agreement while stating why there are differences. Part B: The harsh conditions of the Treaty of Versailles created conflicts amongst Germany and Britain. Germany, led by Chancellor Adolph Hitler, began to resist the terms of the Treaty when they invaded the Rhineland and then when they invaded Austria in 1938. Then, in September 1938 Hitler demanded control of the Sudetenland in Czechoslovakia. Fearing a war, Britain and France agreed to compromise with Germany in the now infamous 'Munich Agreement' of 1938. The agreement supported the policy of appeasementi. It permitted Germany to immediately occupy the Sudetenland so long as they did not attempt any further takeovers in Eastern Europe. ...read more.

The book The Age of Extremes by Eric Hobsbawm appears to be written largely from personal experiences and observation. For example, Hobsbawm writes of how 'for generations the work "Munich" became a synonym, in Western political discourse, for...retreat.'3 Although Hobsbawm does not express his own personal opinion this is an observation that can only be justified through personal experience. Hobsbawm often writes of events as the appeared to him, but he does not take sides or evidently express his own strong opinions. As a historian, Hobsbawm is well known for such an approach. He even recalls himself as a fourteen year old boy who read on a newspaper board the headline announcing the take over of the Third Reich saying 'Anybody who saw Hitler's rise happen first-hand could not help but be shaped by it politically....That boy is still somewhere inside me.' As well, Hobsbawm provides detailed references for his book. The references indicate that huge ranges of sources were consulted for the research of this novel. Most of the sources that Hobsbawm consulted were secondary sources. As a result, they may have contained bias and have some limitations. For example, Hobsbawm's explanation of G�del's Theorem is not completely accurate. However, some titles in Hobsbawm's references are in German, others in French, and others in English. In this way, it is clear that Hobsbawm observed the issues discussed in his book from various, differing, and perspectives. Nonetheless, having once been a member of the Communist party, he devotes a usual amount of time to socialism, and some historians go so far as to claim that he is not anticommunist enough. Although Hobsbawm is not an ardent Marxist, he views Marxism as the best tool for examining the past because of its positivist values and clear affirmation of progress in history. Through his exploration of Marxism came his belief in the "Enlightenment project" dedicated to rationalism and human improvement. ...read more.

Hobsbawm, being educated in both Berlin and London also most likely learnt of the two sides of the Munich Agreement. Part E: Historians view the Munich Agreement as a careless mistake made during uncertain times. The Western democracies felt threatened by Germany's growing military, Germany's willingness to go to war, and Hitler's intentions. They had a discontent and distrust of communism, but at the same time they felt guilty for the Treaty of Versailles and the harsh terms that it implemented upon Germany. The Western democracies also failed to adapt the policy of a new political situation in Europe and to re-evaluate the political environment continuously. Chamberlain also feared that public opinion would not support strong measure against Germany thus he would loose political power. The Western democracies did everything they could to avoid war because they wanted to preserve the country's stability and economic growth. Also, they did not want to destroy the equilibrium of power in Europe. They believed that although compromising this policy of appeasement would prevent a war. However, they made the false yet rational assumption that Hitler also wanted peace. However, Hitler did not want peace. Six months after the Munich Agreement he broke his promise not to seize or demand more territory and took over Czechoslovakia. The mistake that the government made in the signing of the Munich Agreement is constantly ridiculed. However, it is a mistake that has taught us a very valuable lesson. The policy of appeasement is a policy that must be applied very cautiously. This lesson will forever be beneficial to the democracies of the world. i A compromise or agreement drawn upon to try and maintain peace. 1 "The Munich Agreement of 1938." Sorrell. <http://www.sorrel.humbolt.edu/~rescuers/book/chlup/chuplinks/munich.html> 2Kissinger, Henry, Diplomacy, (New York: Simon and Schuster, 1994), p. 290. 3Ibid., p. 291. 4Hobsbawm Eric, Age of Extremes (London: Penguin Books, 1994), p. 146. 5Kissinger, Diplomacy, p.289. 6Hobsbawm, Age of Extremes, p. 146. 7 Ibid., p. 146. 9Kissinger, Diplomacy, p. 292. 10Ibid., p. 37. 11Ibid., p. 146. 12Hobsbawm, Age of Extremes, p.37. 13Kissinger, Diplomacy, p.292. ...read more.