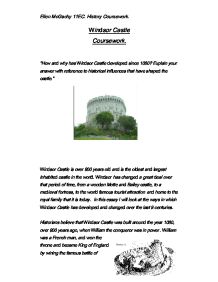 How and why has Windsor Castle developed since 1080?

He also built St Georges chapel, which is the place of worship at Windsor Castle which is now a memorial to King............................................. Henry VIII added 'murder holes' to the Norman Gateway during his reign. Murder holes are holes in the ceiling of a gateway or passage way (in this case a gateway) through which defenders could fire weapons, or pour dangerous substances, boiling oil was a favourite, onto their attackers. They could also throw rocks, shoot arrows, or pour heated sand/water down on their enemies' heads. During the 17th Century civil war broke out in England between the Parliamentarians and the Royalists. During the war Windsor Castle was used as a jail by the Parliamentarians. The castle was captured by Oliver Cromwell after the battle of Edgehill in 1642 and was the Parliamentarian Headquarters as well as a prison until the end of the war. After his father Charles I was executed following being held at Windsor Charles II decided to change the castle, by making it as lavish as possible. He changed it to a baroque palace; baroque is a style of art and music, a baroque palace is fantastically over decorated, ornate, using irregular shapes etc, it is also often described as 'gothic' style. By the 19th Century and the reign of George IV there was no warfare at all. ...read more.

the Parliamentarians and the Royalists, Windsor was changed twice more, to a baroque palace by Charles II then to a fairytale castle by George IV, these changes are political because as the Kings changed so did the castle as they wanted different things, some wanted a defensive castle while others wanted a lavish place to live , A social change is a change that happened to do with society / people and example of this is the reason why William built the castle in the first place; to stop them revolting, Windsor was also changed because Charles I was beheaded there, this still effects the castle today as there are many kings & queens buried there, adding to the things that people come to see. Finally some examples of technological changes are Windsor being changed to stone (as well as a political change) as it went from being wooden to stone, Henry VIII added murder holes to the Norman gateway, George IV added the cone shaped roof and the rectangular tower being changed to what it now. Windsor castle has undergone many changes over the nearly 1000 years since its construction, from a Motte & Bailey, to a stone keep from a prison to a fairytale castle as now a partial royal residency and world famous tourist attraction. ?? ?? ?? ?? Ellen McGachy 11EC. History Coursework. ...read more.