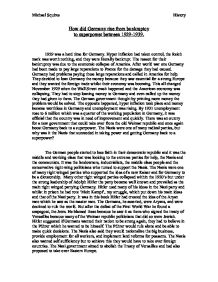 How did Germany rise from bankruptcyto superpower between 1929-1939.

How did Germany rise from bankruptcy to superpower between 1929-1939. 1929 was a hard time for Germany. Hyper inflation had taken control, the Reich mark was worth nothing, and they were literally bankrupt. The reason for their bankruptcy was due to the economic collapse of America. After world war one Germany had been made to pay large reparations to France for the damage they had caused. Germany had problems paying these large reparations and called in America for help. They decided to loan Germany the money because they saw essential for a strong Europe and they wanted the foreign trade whilst their economy was booming. This all changed November 1929 when the Wall Street crash happened and the American economy was collapsing. They had to stop loaning money to Germany and even called up the money they had given to them. The German government thought by printing more money the problem would be solved. The opposite happened, hyper inflation took place and money became worthless in Germany and unemployment was rising. By 1931 unemployment rose to 6 million which was a quarter of the working population in Germany, it was official that the country was in need of improvement and quickly. ...read more.

The reasons for their immediate success was that the old Weimar republics were not trusted they failed in both domestic and foreign affairs. And hated grew quickly towards them for signing the treaty of Versailles as many Germans saw it as a harsh punishment. The amount of political parties in Germany at the time meant there was a weak government. The high unemployment meant many people looked to the more right winged parties and the Nazis prevailed. Also many people saw Hitler as an able leader due to his charisma and his powerful speeches in which he made promises for everybody. When Hitler was appointed chancellor he was only allowed to appoint three Nazi members within his cabinet. He gave positions to Wilhelm Frik as minister of the interior and Herman Goring as minister without portfolio. This coalition government meant Hitler did not have enough power to pass any law he wanted. But it still did have its strengths; because of the scare of a communist coup the conservatives supported Hitler closely and with Goring being in control of the police fore of Prussia and he could hassle opposition parties. Goebbles also used exploited propaganda on behalf of the Nazi party such as articles in newspapers. ...read more.

To achieve these, Germany needed to put forth an aggressive expansionist policy in order to reduce reliance on raw materials. On October 18 1936 Hermann Goering was put in charge of the Four Year Plan. During the following years, Germany began building refineries, aluminum plants, and factories for the development of synthetic-materials. This was firmly basing the German economy in Central Europe and securing its raw materials through barter agreements. In the end, no clear decision on the management of the German economy was made. Large weapons contracts with industrial firms soon had the economy running at top speed, and full employment was reached by 1937. Wages did not increase much for ordinary workers, but job security and food given to the people after years of economic depression was enough to make the general population happy. This helped with Hitler's idea of German self-sufficiency and trying to get them ready for war and the country was now gaining a large army with a good infrastructure and morale of the country was increasing as people was getting work. By 1939 unemployment had dropped to 30 000. Now industrial production was larger than that before the Wall Street crash of 1929 and Germany were ready for like they said they would be within the four year plan. ?? ?? ?? ?? Michael Squires History ...read more.