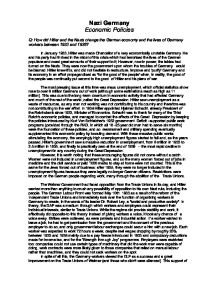 How did Hitler and the Nazis change the German economy and the lives of Germany workers between 1933 and 1936?

Nazi Germany Economic Policies Q: How did Hitler and the Nazis change the German economy and the lives of Germany workers between 1933 and 1936? In January 1933, Hitler was made Chancellor of a very economically unstable Germany. He and his party had thrived in the midst of this crisis which had terrorised the lives of the German populace and owed great amounts of their support to it; However, now in power, the tables had turned on the Nazis. They were now the government upon whom the troubles of Germany would be blamed. Hitler knew this, and did not hesitate to restructure, improve and 'purify' Germany and its economy in an effort propagandised as 'for the good of the people' when, in reality, the good of the people was continually put second to the good of Hitler and his plans of war. The most pressing issue at this time was mass unemployment, which official statistics show rose to over 6 million Germans out of work (although some estimations reach as high as 11 million). This was due to the long-term downturn in economic activity that had affected Germany and much of the rest of the world, called the Great Depression. Hitler saw unemployment as a waste of resources, as any man not working was not contributing to his country and therefore was not contributing to the war effort. ...read more.

Cheap holidays and the offer of them was an ideal way to win the support of the average worker, especially one whose hours have risen and whose pay has fallen. A cruise to the Canary Islands cost 62 marks. Walking and skiing holidays in the Bavarian Alps cost 28 marks. A two-week tour of Italy cost 155 marks. The affordability took a little of the string out of the wage cuts, as, although the workers knew they were being paid less, there was a 'light at the end of the tunnel', so to speak - or at least one that lasted for 3,740 hours. The low prices also facilitated Hitler's other aim: to bridge the class divide by making middle-class leisure activities available to the masses. This was underscored by having cruises with passengers of mixed classes and having them, regardless of social status, draw lots for allocation of cabins. Another less ideological goal was to boost the German economy by stimulating the tourist industry out of its slump from the 1920s, which it did right up until the start of WWII, although by this time Hitler had reached this ultimate goal of war and was not interested in the German people doing anything other than assisting the war effort. ...read more.

Hitler himself was blinded by his own propaganda, in a sense. Everything would be fine once Germany was at war and could claim back what was rightfully hers. But what he ignored, and what the public weren't told, was that the government were in a lot of trouble finance-wise. Government income had been 10 billion Reichsmarks in 1928. In 1939, it stood at 15 billion. However, government spending had increased from 12 billion Reichsmarks in 1928 to over 30 billion in 1939 - a difference of 15 billion Reichsmarks. From 1933 to 1939, the Nazi government always spent more than it earned so that by 1939, government debt stood at over 40 billion Reichsmarks. So, despite the glittering unemployment statistics and celebrations of a New Germany, nothing was dramatically better: real wages were still the same as they were in 1928, living standards had been slashed by a quarter, men were working longer and harder and women weren't supposed to be working at all. The Allies were getting defensive, nobody got the cars they paid for, exports were losing value while imports were gaining. And Germany was about to not only enter, but start and lose, the biggest and most devastating war the world had ever seen. The bigger picture was certainly a lot less attractive. ...read more.