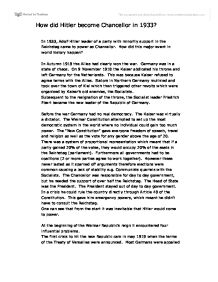 How did Hitler become Chancellor in 1933

In 1933, Adolf Hitler leader of a party with minority support in the Reichstag came to power as Chancellor. How did this major event in world history happen? In Autumn 1918 the Allies had clearly won the war. Germany was in a state of chaos. On 9 November 1918 the Kaiser abdicated his throne and left Germany for the Netherlands. This was because Kaiser refused to agree terms with the Allies. Sailors in Northern Germany mutinied and took over the town of Kiel which then triggered other revolts which were organised by Kaiser's old enemies, the Socialists. Subsequent to the resignation of the throne, the Socialist leader Friedrich Ebert became the new leader of the Republic of Germany. Before the war Germany had no real democracy. The Kaiser was virtually a dictator. The Weimar Constitution attempted to set up the most democratic system in the world where no individual could gain too much power. The "New Constitution" gave everyone freedom of speech, travel and religion as well as the vote for any gender above the age of 20. There was a system of proportional representation which meant that if a party gained 20% of the votes, they would occupy 20% of the seats in the Reichstag (parliament). Furthermore all governments had to be coalitions (2 or more parties agree to work together). ...read more.

The Nazis began as the German worker's Party, led by Anton Drexler. In 1919 Adolf Hitler had great talent and within months he had put him in charge of propaganda and the political ideas of the party (due to his outstanding ability to dictate). In 1920 the party announced its twenty-five-point programme, and renamed itself the Nationalist Socialist German Worker's Party, or Nazis for short as this would appeal to variety of different social classes resulting in a large majority of the vote. By November 1923 Hitler believed that the moment had come for him to topple the Weimar government, as it was preoccupied with the economic crisis. Stresemann had just called off Germany's passive resistance in the Ruhr. On 8th November, Hitler hijacked a local government meeting and announced he was taking over Bavaria. The old war hero Ludendorff joined him. Nazi storm troopers began taking over official buildings. The next day, however, the Weimar government forces hit back. Police rounded up the storm troopers and in a brief exchange of shots 16 Nazis were killed resulting in a rebellion. Hitler escaped in a car while Ludendorff and others stayed to face the armed police. Hitler had miscalculated the mood of the German people. In the short term, the Munich Putsch was a disaster for him, as people didn't rise up to support him. ...read more.

In one sense, Hindenburg had already overthrown the principles of democracy by running Germany with emergency powers. If he was to rescue the democratic system, he needed a Chancellor who actually had support in the Reichstag. Through January 1933 Hindenburg and von Papen met secretly with industrialists, army leads and politicians. On 30 January to everyone's surprise they offered Hitler the post of Chancellor. With only a few Nazis in the Cabinet and von Papen as Vice Chancellor, they were confident that they could limit Hitler's influence and resist his extreme demands. So Hitler ended up as Chancellor through a behind-the-scenes deal by some German aristocrats, not through the will of the German people. Both Hindenburg and von Papen were sure that they could control the monstrosity that was Hitler, both were very wrong! In conclusion I believe that Hitler became Chancellor through a sequence of events. Propaganda works on the basis of already existing prejudices. The Weimar Republic was weak and Hitler capitalised on this increasing his chances of becoming Chancellor. All Hitler did was exploit people prejudices, which is based on a quote by Aldous Huxley; he told the German population what they wanted to hear such as re-introducing conscription (which gained him popular support). The weaknesses of the Weimar Republic in 1918 foreshadowed the fact that Hitler would come to power, which was reinforced by the Nazis strengths. By Josh Leader 3205 Weymouth How did Hitler become Chancellor in 1933? 15/02/2008 07:36 15/02/2008 07:36 ...read more.