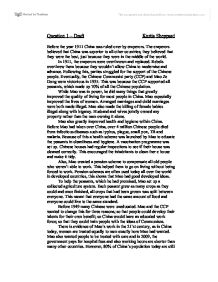 How did Mao ze Dung and Deng Xieoping contribute to the history of China?

Before the year 1911 China was ruled over by emperors. The emperors believed that China was superior to all other countries; they believed that they were the best, just because they were in the middle of the world.

In 1911, the emperors were overthrown and replaced. Rebels overthrew them because they wouldn’t allow China to modernise and advance. Following this, parties struggled for the support of the Chinese people. Eventually, the Chinese Communist party (CCP) and Mao Ze Dong were victorious in 1935. This was because the CCP supported all peasants, which made up 70% of all the Chinese population.

While Mao was in power, he did many things that greatly improved the quality of living for most people in China. Mao especially improved the lives of women. Arranged marriages and child marriages were both made illegal. Mao also made the killing of female babies illegal along with bigamy. Husband and wives jointly owned any property rather than the man owning it alone.

Mao also greatly improved health and hygiene within China. Before Mao had taken over China, over 4 million Chinese people died from infectious diseases such as typhus, plague, small pox, TB and malaria. Because of this a health scheme was launched by Mao to educate the peasants in cleanliness and hygiene. A vaccination programme was set up. Chinese houses had regular inspections to see if their house was cleaned correctly. This encouraged the inhabitants to clean there house and make it tidy.

Also, Mao created a pension scheme to compensate all old people who weren’t able to work. This helped them to go on living without being forced to work. Pension schemes are often used today all over the world in developed countries, this shows that Mao had good developed ideas.

To help the peasants, which he had promised, Mao set up a collected agriculture system. Each peasant grew as many crops as they could and once finished, all crops that had been grown was split between everyone. This meant that everyone had the same amount of food and everyone could live to the same standard.

Before 1949 many Chinese were uneducated. Mao and the CCP wanted to change this for three reasons; so that people could develop their talents for their own benefit; so China would have an educated work force; so that they could train people with the ideas of Communism.

There is evidence of Mao’s work in the 21’st century, as in China today, women are treated equally to men exactly how Mao had wanted. Mao also wanted people to be treated with care and in 2009, the government pays for hospital fees and also working hours are shorter than many other countries. However, 80% of China’s population today are still peasants, this shows that not everybody is equal. Also beggars are still seen on the streets.

When Mao was practicing his health scheme, he decided to tell everyone to collectively kill what he thought were the three enemies of hygiene, rats, flies and sparrows. Each person must kill a  certain amount of days, if they didn’t they got fined, if they killed more, they had a bonus. Because they were killing these animals it meant that they were rapidly destroying the food chain. If they had continued to destroy these animals they could have permanently destroyed the food chain.

While Mao was running his scheme to help the poor, involved in it was to take money from the rich and give it to the poor. The rich were forced to give up there wealth and join the poor. If they did not then Mao had them hung. The idea of this is barbaric and cruel. People are rich because they have worked hard; people are poor because they haven’t. Someone shouldn’t be killed because they don’t wont to give up their life’s work.

The government introduced into each school a programme of ‘ideological remoulding’ or ‘thought reform’ These lessons were held in every school and work place to study the ‘thought of Mao Dze Dung’ to persuade people into Mao’s way of thinking. Mao used propaganda to help him. He put it everywhere; in some buildings they had run out of wall space and had started hanging posters from string. By the end, everyone would do exactly what Mao said.

Because Mao had high hopes for China, he wanted to improve industry. He told everyone to stop what he or she was doing and start smelting steel. Everyone did what he said and spent everyday smelting steel to try and improve industry, however the steel that they had smelted was impure and useless. Because the peasants had been spending their time smelting steel rather than growing crops, when it came to the draught, they had no food. Millions of people died of starvation. While this was happening Mao was nowhere to be seen.

I believe that some of the things that Mao did have put China on the map for the wrong reasons. However in a lot of his work he had good intensions and tried to do the right things.

After Mao had died, a few years after another man took charge, his name was Deng Xiaoping, Deng was in power with similar ideas to Mao. However he did create some of his own ideas of how he thought China should be run.

While Deng was in power he was ambitious, he suggested four things that he believed needed to be improved; Agriculture, industry; defence and technology but he wished not to break any of his principles, which were; Communism; the power of the people; the leadership of the Communist Party; the ideas of Marx Lenin and Mao. Because he modernised these areas, it led to an economic boom and all incomes in China tripled. You can still see his work today, as a lot of industrial work in the 21st century takes place in China.

When Deng was in power, he disagreed with Mao’s idea that everyone should be equal and he also dismantled the collective agriculture system. However, he did assign peasants land that they could treat as their own, they had to give a certain amount of what they grew to the government however the rest that they grew could be sold and kept. This gave the peasants an incentive to work.

Deng also encouraged foreign investment. The foreign manufactures were attracted to the low labour costs in China. This meant that China could have power all over the world and become a powerful country. Because of the investment it meat that business’ could advance further and become more successful.

Young men were often sent abroad for long periods of time to earn money. The men then sent a large percentage of the money home, this helped China to become a wealthy country.

Under Deng, in China, personal wealth increased. More people were able to afford top quality cars and brilliant houses were being built. This shows that Deng had made China into a powerful country. It also shows that all of the four things that Deng wished to modernise ha been a success. You can still see the personal wealth today, as there are many people who own advanced technology that you wouldn’t have expected to see if someone like Mao had still been in power.

In China, although the country’s wealth was increasing, many people’s salaries weren’t and were still staying very low. This led to the rich getting richer and the poor getting poorer within China, which was the complete opposite of Mao’s idea of how China should be run. Many people who worked for the state found their salary very low and intellectuals found their wages lower than street sellers. When in China in the 21st century you can still notice the division of wealth. There are still beggars and peasants living on the streets and still rich people driving around in Ferraris.

While under Deng, China was heavily populated so Deng enforced a disturbing law that devastated people across the world, the one child rule. This meant that any couple were only allowed one child as a family and if they were to have another, it would lead to a long list of fines and disadvantages in China. Because of this rule it led to many people trying to kill their babies and predominantly female babies, as they would not continue the family name. There was an incident where a British woman was in China and took pictures of a Chinese female baby, dead, on the floor, in the middle of the road with people walking past it without paying much attention. This devastated her.

In many peoples view, Deng Xiaoping gave unfair treatment in many peoples view to Hu Yaobang in 1989. In this year, in Tiananmen Square, what happened is still talked about all over the world. Crowds of up to a million filled the square all through April, all gathering to protest. 3000 students staged a hunger strike. Students made speeches demanding the end to corruption. The demands continued through May. On June 4th the army attacked. Heavy tanks and armoured vehicles smashed through the barricades and crushed anyone who got in their way. The number of deaths is still being disputed, eyewitness’ state that hundreds died in the square alone and there were several thousand casualties. This incident has made China famous for the wrong reasons and all of this happened under Deng’s reign. Even today China are still being recognised and criticised for this event.

Both Mao Ze Dong and Deng Xiaoping contributed majorly to where China is today and both did terrible things that also contribute to where they are today. I feel that Deng Xiaoping was more vital to the success of China as when you think of China you think of a very successful country that makes a large percentage of all man made items. It was Deng who has made China into this country.