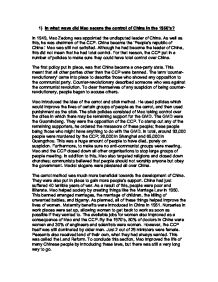 How did Mao Zedong secure control of China in the 1950's?

1) In what ways did Mao secure the control of China in the 1950's? In 1949, Mao Zedong was appointed the undisputed leader of China. As well as this, he was chairman of the CCP. China became the 'People's republic of China.' Mao was still not satisfied. Although he had become the leader of China, this did not mean that he had total control. For that reason, the CCP put in a number of policies to make sure they could have total control over China. The first policy put in place, was that China became a one-party state. This meant that all other parties other than the CCP were banned. The term 'counter-revolutionary' came into place to describe those who showed any opposition to the communist party. Counter-revolutionary described someone who was against the communist revolution. ...read more.

In addition to this, Mao also targeted religions and closed down churches; communists believed that people should not worship anyone but obey the government. Maoist slogans were plastered all over China. The carrot method was much more beneficial towards the development of China. They were also put in place to gain more people's support. China had just suffered 40 terrible years of war. As a result of this, people were poor and illiterate. Mao helped society by creating things like the Marriage Law in 1950. This banned arranged marriages, the marriage of children, the killing of unwanted babies, and bigamy. As planned, all of these things helped improve the lives of women. Maternity benefits were introduced in China in 1951. Nurseries in work places were set up, allowing women to get back to work as soon as possible if they wanted to. ...read more.

Mao and the CCP wanted to 'serve the people' before themselves. Things called 'struggle meetings' and compulsory lessons were introduced in schools and work places. They taught people about Mao, and persuaded people to get rid of any selfish thoughts. These could be as ridiculous as wanting to own a possession, no matter how small. Sometimes people were even bullied into confessing to having any 'wrong ideas' or misdeeds.' Everyone would be interrogated and then humiliated and made to feel guilty about these bad thoughts. If they didn't confess, they would be punished. Therefore, many people simply made things up. People were sent to 're-education' clinics to enable them to think and believe in communism, and to think like a communist. They had to promise to 'serve the people.' Others who didn't agree with this were sent to labour camps or had to work with the peasants in the fields for their 're-education.' ...read more.