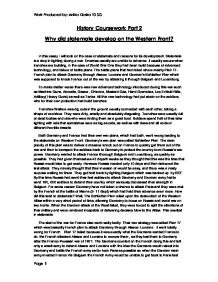 How did stalemate develop on Western Fornt

History Coursework Part 2 Why did stalemate develop on the Western Front? In this essay I will look on the case of stalemate and reasons for its development. Stalemate is a stop in fighting during a war. Enemies usually are unable to advance. It usually occurs when trenches are building, in the case of World War One they had been build because of advanced technology, and failure of battle plans. The battle plans that had failed where mainly Plan 17- French plan to attack Germany through Alsace- Lorraine and German's Schlieffen Plan which was supposed to knock France out of the war by attacking it through Belgium and Luxemburg. To make matter worse there was new advanced technology introduced during this war such as Machine Guns, Aircrafts, Gases ; Chlorine, Mustard Gas, Hand Grenades, Lee Enfield Rifle, Artillery( Heavy Guns) as well as Tanks. All this new technology had put strain on the soldiers, who for their own protection had build trenches. Trenches Welfare was dig outs in the ground usually connected with each other, taking a shape of corridors. They were dirty, smelly and absolutely disgusting. Trenches were usually full of dead bodies and rats who were finding them as a great food. Soldiers spend half of their time fighting with rats that sometimes were as big as cats, as well as with fleas and all sorts of different horrible insects. ...read more.

With remarkable speed the first army, which had already crossed the Marne, turned around and engaged the French sixth army in a fierce battle that after three days of fighting practically assumed German superiority. But by swinging north the first army had opened a gap thirty miles wide between itself and the second German army to the left, a gap that was only superficially screened by cavalry. The British carefully advanced between the two armies. In this way the German positions became somewhat uncertain. This in effect had lead to the stop of the world and trenches. After stalemate had developed there was an important event that had took place. It was called "Race to the sea". The "Race to the sea" was a name given to a period during the World War One in which generals of both armies had realised that they need to get the sea to keep control of the channel port. During this race both armies had lost a lot of soldiers in Ypres where a fight had taken place, however Britain's well organised army had manages to move one and keep control of the channel ports. It was vital to keep control of the ports as the food and artillery could be delivered. This had helped to end the trench welfare as the new improved artillery could be delivered as well as food for the soldiers. ...read more.

The health issue was not the only problem. Many soldiers also got mental issues form being in constant fear of being gasses, which meant an awful, long and painful death ,which soldiers were absolutely terrified off. This and the loneliness that the soldiers must have felt, as well as being tried of this bad conditions lead to serious mental problems in some cases. In this conditions the morale of the soldiers was really low. As well as being physically unable to fight they were also unable to fight mentally. They felt constantly low and depressed. I think that one of the most important reasons for which stalemate had developed was the failure of both plans Plan 17 and Schlieffen Plan on which both armies had heavily relied. The new artillery as well as the poor conditions and morale had also kept soldiers from moving. The conditions of no-man's land and trenches surly did not help the situation. Overall I think that there were many reasons for which the stalemate had developed and had not broke for a long time and they are equally important, as they had all played a part and if one was to be deleted or excluded the stalemate would probably last for a shorter period of time or might had not developed in the first place. ?? ?? ?? ?? Work Produced by: Anika Kloska 10 SG Page 1 ...read more.