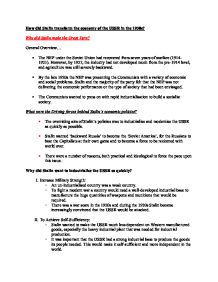 How did Stalin transform the economy of the USSR in the 1930s?

How did Stalin transform the economy of the USSR in the 1930s? Why did Stalin make the Great Turn? General Overview... * The NEP under the Soviet Union had recovered from seven years of warfare (1914-1921). However, by 1927, the industry had not developed much from the pre-1914 level, and agriculture was still severely backward. * By the late 1920s the NEP was presenting the Communists with a variety of economic and social problems. Stalin and the majority of the party felt that the NEP was not delivering the economic performance or the type of society that had been envisaged. * The Communists wanted to press on with rapid industrialisation to build a socialist society. What were the Driving forces behind Stalin's economic policies? * The overriding aim of Stalin's policies was to industrialise and modernise the USSR as quickly as possible. * Stalin wanted 'backward Russia' to become the 'Soviet America', for the Russians to beat the Capitalists at their own game and to become a force to be reckoned with world over. * There were a number of reasons, both practical and ideological to force the pace upon this issue. Why did Stalin want to industrialise the USSR so quickly? ...read more.

So the peasants had to sell theirs at much lower prices to be able to pay their taxes. * Although this plan had worked initially, the peasants soon got wise to the government's ploy. Since meat prices were still going up, they started to feed grain to their animals rather than sell it at the lower prices. Also, they found that there was not much point in having surplus money because there was little that they could buy with it, since industrial consumer goods were still in short supply, so the peasants started to hold back their grain from the market, hoping for the price to rise. As a result, the grain procured by the state at the end of 1927 was about 3/4 of what it had been in 1926. Was the NEP working for the Urban Workers? * The NEP had not brought great rewards for the urban workers, although they were better off than at any time before the revolution, real wages had, by 1928, only just passed the pre-war level. True, they had an eight-hour working day and other social benefits, and in state-run factories they had some power. Local trade union representatives often sat on a panel running the factory alongside the specialist director (usually an old Bourgeois manager). ...read more.

Historians suggest that the USSR would have done better to continue with the NEP! (Reference Page 197). Summary of the Great Turn... a. The NEP was not producing the sort of Society that many Communists wanted by the end of the 1920s. b. There was a continuing debate about the NEP in the Communist party throughout the 1920s the right wing of the party want to keep it and the left wing wanted to end it. c. No Communists liked the outward manifestations of the NEP - the Nepmen and the strength of the private market. Nor did they like being held to ransom by the peasants. d. Urban workers and Communist party members wanted to move forward to take the revolution on and build a Socialist Society. e. The workers were suffering from high unemployment rates and very low wages. f. The peasantry were starting to hold back food from the market and food shortages were extremely serious in 1928-28. g. There was a War scare in 1928, which increased the Soviet Union fears about their invulnerability to attack and that from this they may need to produce armaments urgently. h. In 1928, the decision was taken to end the NEP and to embark in a massive industrialisation programme in the Five-Year Plans. i. This has been called the Great Turn and it marked a significant shift, economically, politically and culturally - in the history of the Soviet Union. ...read more.