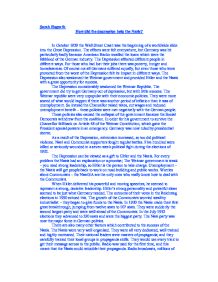 How did the depression help the Nazis?

Sarah Hogarth How did the depression help the Nazis? In October 1929 the Wall Street Crash was the beginning of a worldwide slide into the Great Depression. The effects were felt everywhere, but Germany was hit particularly badly because American Banks recalled the loans which were the lifeblood of the German industry. The Depression affected different people in different ways. For those who had lost their jobs there was poverty, hunger and homelessness. Of course not all Germans suffered equally, but even those who were protected from the worst of the Depression felt its impact in different ways. The Depression also weakened the Weimar government and provided Hitler and the Nazis with a great opportunity for success. ...read more.

Nazi and Communist supporters fought regular battles. Five hundred were killed or seriously wounded in a seven week political fight during the elections of 1932. The Depression can be viewed as a gift to Hitler and the Nazis. For every problem the Nazis had an explanation or a promise; The Weimar government is weak - you need strong leadership, so Hitler is the person to take charge. Unemployment - the Nazis will get people back to work on road-building and public works. Worries about Communists - the Nazi SA are the only ones who really know how to deal with the Communists. When Hitler delivered his powerful and moving speeches, he seemed to represent a strong, decisive leadership. ...read more.

They would use every trick to get their message across to the public. Radio was used for the first time, and this meant that the Nazis could redouble their propaganda. Radio broadcasts, millions of election posters, rallies, parades and marches carried the Nazi message into every town and home in Germany. Another reason for the Nazis success was that they were flexible. If they found an idea was loosing them support they would change it. Also the opposition were weak. The other parties were consistently underestimated by the Nazis. The Social Democrats feared they would attempt a putsch, but they thought that the Nazis electioneering was so absurd that ordinary Germans would see through it. And their own support was constant so they were not eager to change. They quarrelled among themselves rather than uniting to face the Nazis' challenge. ...read more.