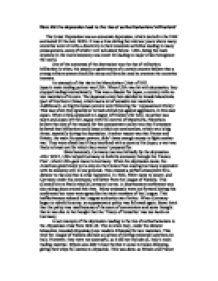 How did the Depression lead to the rise of authoritarianism/militarism?

How did the depression lead to the rise of authoritarianism/militarism? The Great Depression was an economic depression, which started in the 1929 and lasted till the late 1930's. It was a time during the interwar years where many countries were hit with a downturn in their economic activities leading to many consequences, some of which I will talk about below. USA, being the main keystone in the world economy was worst hit leading to major crisis throughout the world. One of the outcomes of the depression was the rise of militarism. Militarism is when, the people or government of a certain country believe that a strong military system should be setup and force be used to promote the countries interests. ...read more.

Historians believe that one of the reasons for the appeasement policy was that Europeans believed that Militarism could keep a check on communism, which was a big threat, especially during the depression. Another reason was that France and Britain, the main European powers, didn't have enough money to fight another war. They were afraid that if they interfered with a country like Japan, a war was likely to break out for which they weren't prepared for. Simultaneously, Germany too was hit badly by the depression. After WW1, USA helped Germany re-build its economy through the 'Dawes Plan', where USA gave loans to Germany. ...read more.

A last example of the depression leading to the rise of authoritarianism is the Abyssinian crisis from 1935-36. This is when Italy, under the dictator Mussolini, invaded Abyssinia (now modern Ethiopia) for raw materials. This time the League of Nations did take an action of putting economic sanctions on Italy. However, they were not successful, as it did not include oil, Italy's main trading material. Britain also didn't close the Suez Canal to Italian Shipping, giving their ships full access to Abyssinia. This was done, as Britain and France wanted to keep a friendly relationship with Italy in the face of growing German power. In conclusion, I would like to say that the Great Depression lead to many consequences, a major one being the rise of authoritarianism and militarism. ...read more.