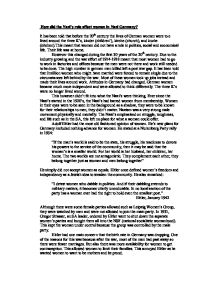 How did the Nazi's rule affect women in Nazi Germany?

How did the Nazi's rule affect women in Nazi Germany? It has been told that before the 20th century the lives of German women were to e lived around the three K's, kinder (children'), kirche (church), and kuche (kitchen).This meant that women did not have a role in politics, social and economical life. Their life was at home. However this changed during the first 30 years of the 20th century. Due to the industry growing and the war effort of 1914-1918 meant that most women had to go to work in factories and offices because the men were not there and work still needed to be done. The high number in germen men killed left a post war gap. It has been told that 2million women who might have married were forced to remain single due to the circumstances left behind by the war. Most of these women took up jobs instead and made their lives around work. Attitudes in Germany had changed. German women became much more independent and were allowed to think differently. The three K's were no longer lived around. This however didn't fit into what the Nazi's were thinking. Ever since the Nazi's started in the 1920's, the Nazi's had barred women from membership. ...read more.

One of the reasons for this was because after the war, most of the men had past away so there were fewer marriages. But also there was more availability for women to get contraception. This allowed women to limit their families. This annoyed Hitler as he wanted women to want to be mothers and be proud. After 1933, most Germans were taking in Hitler's views. Women started to give up work, went home to become "mothers for the greater good of the nation". The NSF claimed to help give women what they needed, but was controlled by the Nazi's so it was easier to limit what a woman could do. The universities started to take in fewer women, there were fewer jobs that needed a woman, and the civil service closed its doors to all women. But it wasn't such a struggle, women who gave up their jobs were rewarded with special grants. Now that their were restrictions on where women could work, the Nazi's used propaganda to promote the woman's place at home and the ideal German woman. This picture shows one of the Nazi's favourite themes, to show a nursing mother who's milk gave life to her child and the nation. ...read more.

They also gave medals to women with many children. They forced childless couples to divorce so that they could find someone else. This is what the Nazi's done to push women into having children. Hitler wanted Germany to be the great country and he believed it started in the home. Women were not allowed to marry a Jew or anyone with and inherited illness such as blindness or epilepsy. Anyone with an illness had to be sterilized. Some women protested but were not paid attention to. Birth control clinics closed and abortion was an illegal act for the woman and the abortionist. Women protested as abortion was seen as a way to get rid of "undesirables". These protests were ignored. The Nazi's encouraged that women, especially mothers, did not wear make up. So they looked pure but also it was seen as a Jewish habit which a good German wouldn't do. Smoking was also unsuitable for women. People were told that if they saw a woman smoking they should tell her that it didn't improve her image as a mother. The NSF did a campaign against "masculinization" which included the way women wear their hair and how they dressed which could "blur the differences between the sexes". The NSF also promoted how what the fuhrer admired in German women was their " feminine grace and female charm". ...read more.