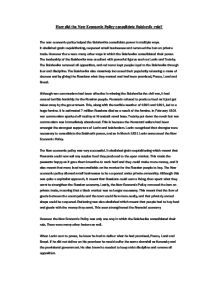 How did the new economic policy cosolidate the boshevik rule?

How did the New Economic Policy consolidate Bolshevik rule? The new economic policy helped the Bolsheviks consolidate power in multiple ways. It abolished grain requisitioning, reopened small businesses and removed the ban on private trade. However there were many other ways in which the Bolsheviks consolidated their power. The leadership of the Bolsheviks was excellent with powerful figures such as Lenin and Trotsky. The Bolsheviks removed all opposition, and red terror kept people loyal to the Bolsheviks through fear and discipline. The Bolsheviks also massively increased their popularity releasing a mass of decrees and by giving the Russians what they wanted and had been promised, Peace, Land and Bread. Although war communism had been effective in winning the Bolsheviks the civil war, it had caused terrible hardship for the Russian people. Peasants refused to produce food as it just got taken away by the government. This, along with the terrible weather of 1920 and 1921, led to a huge famine. It is estimated 7 million Russians died as a result of the famine. ...read more.

He also knew he needed to keep strict discipline and remove all opposition. Lenin immediately set up the Council of people's commissars (Sovnarkom). The Sovnarkom issued their first decree on 8 November announcing that Russia wanted peace with Germany. They then released a massive amount of decrees to try and strengthen the Bolshevik hold on Russia. Peasants were given the lands of the Tsar and the churches. Factories were also put into the hands of the workers, and the Bolsheviks were given the power to deal ruthlessly with opposition. Lenin had also promised free elections to the new constituent assembly. Elections were held in 1917, and as Lenin had feared the Bolsheviks did not gain a majority. Their rivals, the peasant based social revolutionaries won the elections. Lenin solved this problem in his typically direct way, and sent Trotsky and the red guards to close down the assembly and put down the protests as a result of it. Lenin now instead used the congress of soviets to pass his laws as it contained a Bolshevik majority. ...read more.

In conclusion, the new economic policy was very effective in consolidating the Bolshevik power. It banned grain requisitioning which gave the peasants incentive to work, and also increased food production and therefore stopped the famine. It also allowed reopened small businesses under private trade meaning the Russians could earn a living, and spend what they earnt to strengthen Russian economy. The NEP lastly removed the ban on private trade, removing the need for a black market and allowing the flow of goods between towns and the countryside to flow more easily. Rationing was also abolished meaning people had to spent what they earnt on food and goods, this strengthened the financial economy. However the Bolsheviks also consolidated their power in other ways. They removed all opposition through the political system, the Cheka and the power that the Bolsheviks held to deal ruthlessly with opposition. They also gained support from the Russians by giving them Peace through the Brest-Litovsk treaty, and land through Bolshevik decrees which gave peasants the Tsars and the churches land. Lastly during the civil war, the Bolsheviks used red terror and the Cheka to keep loyalty to the reds, and to destroy the whites and any other opposition. ...read more.