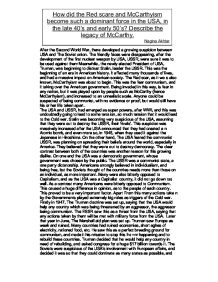 How did the Red scare and McCarthyism become such a dominant force in the USA, in the late 40's and early 50's? Describe the legacy of McCarthy.

After the Second World War, there developed a growing suspicion between USA and The Soviet union. The friendly faces were disappearing, after the development of the first nuclear weapon by USA, USSR, were sure it was to be used against them Meanwhile, the newly elected President of USA, Truman, was beginning to distrust Stalin, leader the USSR. This was the beginning of an era in American history. It affected many thousands of lives, and had a massive impact on American society. The Red scar, as it was also known, McCarthyism was about to begin. This was the fear communism, and it taking over the American government. Being invaded in this way, is fear in any nation, but it was played upon by people such as McCarthy (hence McCarthyism), and increased to an unrealistic scale. Anyone could be suspected of being communist, with no evidence or proof, but would still have his or her life taken apart. The USA and USSR, had emerged as super powers, after WWI, and this was undoubtedly going to lead to some tension, so much tension that it would lead to the Cold war. Stalin was becoming very suspicious of the USA, assuming that they were out to destroy the USSR, their 'rivals'. This suspicion was massively increased after the USA announced that they had created an Atomic bomb, and even more so, in 1945, when they used it against the Japanese in Hiroshima. On the other hand, The USA feared the communist USSR, was planning on spreading their beliefs around the world, especially in America. ...read more.

Eventually Hiss was convicted for perjury and sentenced to jail for five years, Before now, the American public had never seen anything this close to espionage, and it had not only increased public paranoia, but helped McCarthy in persuading the public into believing his witch-hunts were right. In 1949, the USSR caught up with America and announced they had created a nuclear weapon, four years before the Americans had expected them to. The US government could not believe that the Soviets could have done it so fast on their own, and suspected spies of passing on Atomic secrets to the USSR. In 1950, Klaus Fuchs, a German physician, living in Britain was convicted of this crime. This led to suspicions against Ethel and Julius Rosenberg, three years later. Husband and wife were accused of spying for the USSR, but they denied all charges against them. Unlike Alger Hiss, they were found guilty of espionage, and were executed in June 1953. The evidence that was said against the Rosenberg's was not very strong, but it has now been discovered that they were guilty, as historians have found telegrams between them and Soviet agents. The Rosenberg case was very important in helping the Red scare become such a dominant force in the USA, as it proved to the American public that such things were becoming a reality, and this increased the fear of Communism. Also it gave McCarthy a lot more ground as he now had real examples to scare the public with, and to whip up fear. These cases lead to the McCarran Internal security act being passed. ...read more.

Slogans such as; 'Reds under the beds', were still commonly used. McCarthy had had a lasting effect, as in 1954; Communist party was officially banned in the USA. Some companies and even some states still demanded pledges of loyalty from their employees, this carried don till the 1960's. People, who had been blacklisted thanks to McCarthy, remained blacklisted for many years, even after McCarthy had died. Although McCarthy had whipped up a lot of fear of Communism, it already existed in the US publics mind, and in some cases it stayed there for long after the McCarthy era. The USA, like every other nation had fears of being taken over, invaded by a foreign army. Their fear was massively whipped out of proportion, thanks to the media, and people such as McCarthy. It was played upon to such an extent that it ruined many peoples lives, and instead of being a worry at the back of each persons mind was splashed in front of their face day in, day out, to make it an every day reality. In my opinion the reason why The Red scare became such dominant force was because the USA, public and government, were afraid to see any competition. Earlier, when US, and Soviet relations were good, the Soviets were seen as to be 'remarkably similar to Americans'. They saw each other as the competition, the enemy, an enemy completely equal to them. The reason it became such a big thing was because it was publicised so greatly, and the fact that it was used to win votes, and publicity. It was a natural fear, played upon by man, and increased to a dangerous level. ...read more.