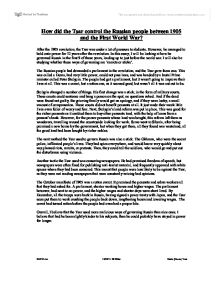 How did the Tsar control the Russian people between 1905 and the First World War?

How did the Tsar control the Russian people between 1905 and the First World War? After the 1905 revolution, the Tsar was under a lot of pressure to abdicate. However, he managed to hold onto power for 12 years after the revolution. In this essay, I will be looking at how he governed Russia in the first 9 of these years, leading up to just before the world war. I will also be studying whether these ways of governing are 'carrots or sticks'. The Russian people had demanded a parliament in the revolution, and the Tsar gave them one. This was called a Duma, had very little power, could not pass laws, and was headed by a brutal Prime minister called Peter Stolypin. ...read more.

It just made their meek little lives even fuller of worry and fear. Next, Stolypin's land reform was put in place. This was good for the richer peasants as it enabled them to buy other peasants land, with the help of loans from a peasant's bank. However, for the poorer peasants whose land was bought, this reform left them as wanderers, travelling around the countryside looking for work. Some went to Siberia, after being promised a new home by the government, but when they got there, all they found was wasteland, all the good land had been bought by richer nobles. The next method the Tsar used to govern Russia was also a stick. The Okhrana, who were the secret police, infiltrated people's lives. ...read more.

The October manifesto of 1905 was a rotten carrot. It promised the peasants and urban workers all that they had asked for. A parliament, shorter working hours and higher wages. The parliament however, had next to no power, and the higher wages and shorter days were short lived. By December, all the troops were back in Russia, having signed a peace treaty with Japan, and the Tsar soon put them to work crushing the people back down, lengthening hours and lowering wages. The carrot had turned rotten before the people had even had a proper bite. Overall, I believe that the Tsar used more malicious ways of governing Russia than nice ones. I believe that had he been slightly kinder to his subjects, then he could probably have stayed in power for longer. ?? ?? ?? ?? Document1 18/09/11 08:00hrs Name (House) Year ...read more.