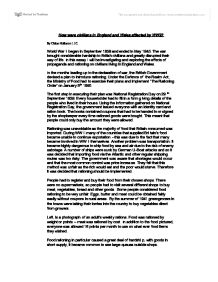 How did WW2 effect civilians in England and Wales

How were civilians in England and Wales affected by WW2? By Chloe Halloran 11C World War II began in September 1939 and ended in May 1945. The war brought considerable hardship to British civilians and greatly disrupted their way of life. In this essay I will be investigating and exploring the effects of propaganda and rationing on civilians living in England and Wales. In the months leading up to the declaration of war, the British Government devised a plan to introduce rationing. Under the Defence of the Realm Act, the Ministry of Food had to exercise their plans and implement 'The Rationing Order' on January 8th 1940. The first step in executing their plan was National Registration Day on 29th September 1939. Every householder had to fill in a form giving details of the people who lived in their house. Using the information gathered on National Registration Day, the government issued everyone with an identity card and ration book. The books contained coupons that had to be handed in or signed by the shopkeeper every time rationed goods were bought. This meant that people could only buy the amount they were allowed. Rationing was unavoidable as the majority of food that Britain consumed was imported. During WW II many of the countries that supplied Britain's food became unable to continue exportation - this was due to the fact that many became involved in WW II themselves. Another problem was transportation: it became highly dangerous to ship food by sea and air due to the risk of enemy sabotage. A number of ships were sunk by German U-Boat attacks and so it was decided that importing food via the Atlantic and other regular shipping routes was too risky. The government was aware that shortages would occur and that the most common control was price increase. They felt that this method was unfair as the rich would eat and the poor would starve. ...read more.

The document to the left is the official rationing guideline issued by the board of trade. It is a both useful and reliable source preserved from June 1941. It is useful as it shows us the numbers of coupons required to purchase certain items of clothing. The item which required the most coupons was a mackintosh coat, the items which required the least, a tie or pair of handkerchiefs. Men's items required more coupons than women's as they generally contained more material. Children's clothes cost less and used fewer coupons as they usually consisted of the smallest amount of fabric. This source also reinforces the British Governments point that "rationing was introduced not to deprive of real needs, but to make sure you got your fair share of the country's goods". It is a reliable source as it was issued by the board of trade and we can see its authenticity stamp in the top left-hand corner. It is very factual and gives us a lot of information about clothes rationing. Petrol was also rationed during World War II. Petrol was allocated according to individual needs. For example, if you had a long way to travel to work, you would have been issued with more petrol than someone who didn't work. Another thing that had to be taken into account was the Blackout. It was dangerous to use cars in the dark without any headlights so people relied heavily on public transport. The sale of bicycles also started to increase as they required neither petrol nor headlights and could be used whenever necessary. Civilians in England and Wales were significantly influenced and affected by propaganda. "Propaganda is the deliberate, systematic attempt to shape perceptions, manipulate cognitions and direct behaviour to achieve a response that furthers the desired intent of the propagandist." - Garth S. Jowett and Victoria O'Donnell, Propaganda and Persuasion As described above, propaganda is a concerted set of messages aimed at influencing the opinions or behaviour of large numbers of people. ...read more.

My Grandmother remembers tuning in to Lord Haw Haw and Germany Calling during the war years. She explained; "Lord Haw Haw used to come on the wireless every evening. He used to lie about bombing to try and frighten people and he used to exaggerate Britain's defeats. He used to say that ships had been sunk and that soldiers had been captured! He used to laugh and make fun of Britain and say that Germany were winning the war. Everybody knew that he was a liar and so he didn't damage morale. Not many people paid much attention because they could see that it was just propaganda!" This source originates from my Grandmother, Doris Jones aged 83; it was obtained via a conversation in June 2008. The source is very useful as it tells me as a historian that people could see through the Nazi propaganda that Lord Haw Haw broadcast. We learn that he used to exaggerate bombings and defeats but his scaremonger tactics didn't have much of an effect. We must question its reliability as it was recorded a long time after the war ended. In addition memories that are recollected verbally are prone to exaggeration so we must take this into account when we query its integrity. Civilians living in England and Wales during World War II were greatly affected by many aspects of the War. After conducting my research, I believe that civilians were affected much more by rationing than propaganda. Rationing affected home life in many ways - from Dig for Victory to making the best of the conservative rations. Propaganda took effect on a much smaller scale. Although it strengthened morale considerably, it had a modest impact on day to day life. World War II was a people's war that enlarged democratic aspirations and produced promises of a postwar welfare state. Public opinion strongly supported the war and the level of individual sacrifice was high. I strongly believe that Britain's Home Front played an integral part in the War effort and was a major factor in the Allies glorious victory over Nazi Germany in 1945. ...read more.