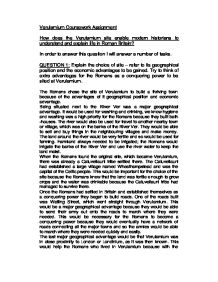 How does the Verulamium site enable modern historians to understand and explain life in Roman Britain?

Verulamium Coursework Assignment How does the Verulamium site enable modern historians to understand and explain life in Roman Britain? In order to answer this question I will answer a number of tasks. QUESTION 1: Explain the choice of site - refer to its geographical position and the economic advantages to be gained. Try to think of extra advantages for the Romans as a conquering power to be sited at Verulamium. The Romans chose the site of Verulamium to build a thriving town because of the advantages of it geographical position and economic advantage. Being situated next to the River Ver was a major geographical advantage. It would be used for washing and drinking, we know hygiene and washing was a high priority for the Romans because they built bath -houses. The river would also be used for travel to another nearby town or village, which was on the banks of the River Ver. They would be able to sell and buy things in the neighbouring villages and make money. The land around the river would be very fertile and so would be used for farming. Farmland always needed to be irrigated; the Romans would irrigate the banks of the River Ver and use the river water to keep the land moist. When the Romans found the original site, which became Verulamium, there was already a Catuvellauni tribe settled there. The Catuvellauni had established a large village named Wheathampstead and was the capital of the Celtic people. This would be important for the choice of the site because the Romans knew that the land was fertile enough to grow crops and the water was drinkable because the Catuvellauni tribe had managed to survive there. Once the Romans had settled in Britain and established themselves as a conquering power they began to build roads. One of the roads built was Watling Street, which went straight through Verulamium. ...read more.

QUESTION 2c: "The Romans liked beautiful things and adored entertaining and being entertained." What evidence is there to suggests that this is true? At Verulamium there is a lot of evidence for all three parts of this question. There is also a lot of need for general knowledge and background reading revision to show how the evidence at Verulamium was used. Evidence of "Beautiful Things" at Verulamium was endless. Jewellery made of gold, bronze, jet and precious stones and glass beads were found. Cosmetics such as eyeliner were found this; evidence shows that Roman people like to look good and were quite vain. Evidence of mosaics and wall decoration showed that the Romans wanted their houses to look beautiful, this also shows skilled engineering. My background revision shows that the Romans gave a lot value to professions like painters and potters. Painting was one the highest paid professions. All this evidence suggests that the Roman people like to own beautiful things have beautiful things and to look beautiful. We know that the Roman people adored to entertain because there was evidence of Semian pottery which would only be used on special occasions when entertaining. Semian pottery was very sought after, beautiful pottery and was decorated with pictures of animals. Evidence of kitchen equipment and cutlery shows that Romans liked to entertain. Evidence of the Romans being "entertained" at Verulamium was quite easy to find. There was a theatre built at Verulamium that we were unable to see, but this shows that Romans liked to watch shows and plays enough to build a theatre. The public baths would have been a major part of Roman life. They would have been the "gossip houses" the where Romans would meet up with friends and chat whilst in the baths. Roman people would have played instruments as entertainment we know this because a mouthpiece from a trumpet was found. ...read more.

QUESTION 6: How would you improve the site so that young historians could learn more about Verulamium? The Verulamium museum had loads of information in it that has been obtained from the artefacts that have been found and you can easily learn plenty of information from what is currently there. So to find things to make it better is very difficult. Although there was lots evidence that has already been dug up if they chose to dig up the rest of the local park that the town of Verulamium was situated on they find a lot more about how the Verulamium has changed over years. The information boards were very factual and there was almost too much too take in and they looked like huge boards of writing. If they made these information boards more interesting and accessible more people would learn more things. Also if they had leaflets to summaries the key points so you could take the information away with when you left would be helpful. The videos on show in the museum were a bit dated and need to be updated. They were also too long no one will want to stand around watching a dated video for ten minutes. We know that they did scans of the fields to obtain more information. If they were to display these scans it would help people to find out how they knew what artefacts were there without digging it up. Also if they did a small interactive presentation where people can get involved on how daily life might work instead of large information boards and picture boards people would take more away. All the improvements I could think of all could be changed if they considered different learning styles. Not everyone learns their best when reading large pieces of writing. If they tried to accommodate most styles of learning then everyone would take all they could from Verulamium. I think if they considered my improvements, the Verulamium museum would be much better and people will be able to take more form it. ...read more.