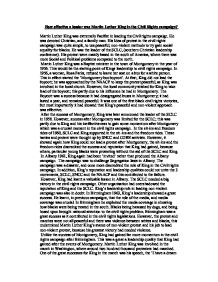 How effective a leader was Martin Luther King in the Civil Rights campaign?

How effective a leader was Martin Luther King in the Civil Rights campaign? Martin Luther King was extremely Pacifist in leading the Civil rights campaign. He was devoted Christian, and a family man. His Idea of protest in the civil rights campaign was quite simple, to use peaceful, non-violent methods to try gain social equality for blacks. He was the leader of the SCLC, (southern Christian leadership conference). His protest were mainly based in the south of America, where there was more Social and Political problems compared to the north. Martin Luther King was a Baptist minister in the town of Montgomery in the year of 1956. This would be the starting point of Kings leadership to civil rights campaign. In 1956, a woman, Rosa Parks, refused to leave her seat on a bus for a white person. This in effect started the 'Montgomery bus boycott'. At first, King did not lead the boycott; he was approached by the NAACP to keep the protest peaceful, as King was involved in the local church. ...read more.

In Albany 1961, King again had been 'invited' rather than produced the Albany campaign. The campaign was to challenge Segregation laws in Albany. The campaign was a disaster, and once more discredited the role of King in the Civil rights campaign. In addition, King's reputation and leadership qualities could not unite the 3 movements, SCLC, SNCC and the NAACP and this contributed to the failure. However, King had learnt a valuable lesson in Albany. The SCLC needed a big victory in the civil rights campaign. Other organisation had overshadowed the reputation of King and the SCLC. King's leadership role in leading non-violent campaign was also in doubt. In Birmingham 1963, King's leadership showed a great success. He learnt, in previous campaigns, that the role of the media, and media coverage was crucial. In Birmingham he exploited the media coverage in showing how blacks were being treated in the south. Blacks being harassed by dogs, and being hosed upon brought national attention to the civil rights problem. Birmingham was a great success as it contributed in the civil rights legislations. ...read more.

Young blacks in the north thought of King as being too peaceful and not radical enough. In conclusion, I think Kings effectiveness in the civil rights campaign was quite significant. Firstly we must understand that before King, there was no real leader in the Civil rights campaign. Therefore, him campaigning and bringing attention to the Civil rights issue, was a success in it self. However, at times it could be argued that King leadership was not really great because he had not seized the moment, especially after Montgomery. King was quite effective in bringing change in parts of the south, the first of that Montgomery, where he showed how his peaceful, non-violent methods were effective. Although his later success which involved Birmingham was in some ways violent, King's role in Birmingham was always to encourage non-violence and peace, which contributed in the success. King effectiveness in the north can be debated, however, King was more of campaigner in Social change rather than economical. King non-violent campaign was clearly effective because it did bring change in America. As a leader King was very effective in the Civil rights campaign because he brought attention to the problem. ...read more.