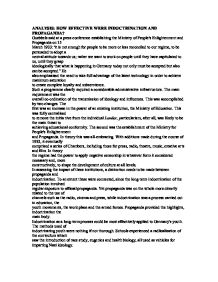 HOW EFFECTIVE WERE INDOCTRINATION AND PROPAGANDA?

ANALYSIS: HOW EFFECTIVE WERE INDOCTRINATION AND PROPAGANDA? Goebbels said at a press conference establishing the Ministry of People's Enlightenment and Propaganda on 15 March 1933: 'it is not enough for people to be more or less reconciled to our regime, to be persuaded to adopt a neutral attitude towards us; rather we want to work on people until they have capitulated to us, until they grasp ideologically that what is happening in Germany today not only must be accepted but also can be accepted." He also emphasised the need to take full advantage of the latest technology in order to achieve maximum saturation to create complete loyalty and subservience. Such a programme clearly required a considerable administrative infrastructure. The main requirement was the overall co-ordination of the transmission of ideology and influences. This was accomplished by two changes. The first was an increase in the power of an existing institution, the Ministry of Education. This was fully centralised to remove the initia tive from the individual Lander; particularism, after all, was likely to be the main threat to achieving educational conformity. The second was the establishment of the Ministry for People's Enlightenment and Propaganda. In theory this was all-embracing. With additions made during the course of 1933, it eventually comprised a series of Chambers, including those for press, radio, theatre, music, creative arts and film. ...read more.

Increased access to radio sets was, of course, an essential prerequisite for the success of this approach. This was achieved, with ownership of sets increasing from 25 per cent of households in 1932 to 70 per cent by 1939, the largest proportion anywhere in the world. For the vast majority of the population the radio provided the most abiding impression of the Fuhrer that they were ever likely to have. As such this component of propaganda must go down as a considerable success. Film proved a more difficult medium, and the regime used it less effectively than they did the radio. The most accomplished film was not necessarily the most influential. Riefenstahl's Triumph of the Will was commissioned by Hitler himself as a record of the Nuremberg rallies of 1934. Technically a brilliant achievement, it created a multi-layered image of Nazism which brought in all elements of society and directly fostered the Fuhrer cult. On the other hand, it was too long for most audiences, who sometimes reacted negatively to the repetition of the same types of scene. During the war, film-based propaganda was radicalised and the anti-semitic component became more extreme. But it soon became apparent that Hitter's vision -of what was likely to engage the public was less effective than Goebbels's. ...read more.

Throughout the Nazi era there were really two levels of propaganda. One level put across Hitler's basic ideology, the other made pragmatic adjustments to fit the needs of the moment. During the period 1933-9, pragmatism frequently diluted ideology, giving rise to considerable theoretical inconsistency in Hitter's ideas. During this period Hitler was presented as a man of peace and yet all the processes of indoctrination and propaganda emphasised struggle and its martial refinement. The period 1939-45 tended to bring together more completely the man and his ideas. This occurred in two stages. The first was the acclimatisation of the people to the idea of war, achieved through the emphasis on Blitzkrieg, or 'lightning' war. Logically this fitted in with the notion of easy conquest achieved by the 'master race', and while it lasted it was a considerable success: Hitler probably reached the peak of his popularity in 1940, at the time of the fall of France. During the second stage, however, propaganda had to acclimatise the people to the experience of war. At first Goebbels scored a propaganda success in his 'total war' speech in 1941 but, in the longer term there was a clear decline in popular enthusiasm. From 1943 the main characteristic shown by German civilians was fortitude in the face of adversity and destruction, not a fanatical desire to achieve a world vision. By this stage, Nazi propaganda and indoctrination had not so much failed. They had become irrelevant. ...read more.