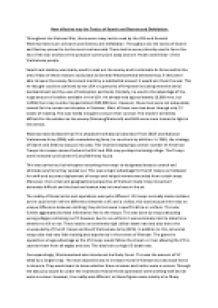 How Effective Were The Tactics Of Search And Destroy And Defoliation During The Vietnam War?.

﻿How effective was the Tactics of Search and Destroy and Defoliation. Throughout the Vietnam War, there were many tactics used by the USA and General Westmoreland such as Search and Destroy and Defoliation. Throughout all, the tactics of Search and Destroy proved to be the most controversial. These tactics were primarily used to force the end of the war and force the spread of communism away and win ?Hearts and Minds? of the Vietnamese people. Search and destroy was mainly used to seek out the enemy and to eliminate its forces within the area. Many of these missions took place as General Westmoreland believed that, if they were able to lower the enemy forces and moral by a substantial amount it would win them the war. This he thought could be achieved by the USA?s superiority of firepower including intensive aerial bombardment and the uses of helicopters and tanks. Similarly, he used to the advantage of the huge amount of soldiers available in the USA. He already had approximately 16,000 men, but in1964 the troop number topped almost 500,000 men. However, these men were not adequately trained for the terrain and situation in Vietnam. Most of these men had been through only 12 weeks of training. This was hardly enough to ensure their survival. This made it extremely difficult for the soldiers as the enemy (Vietcong/Vietminh) and NVA were more trained to fight in this terrain. ...read more.

Many soldiers would lie on their count. Then this information was falsified in the information sent back to the USA. Additionally, after a raid, they could barely tell the difference between a dead VC and a dead Civilian, so they would estimate how many were killed. But, to add the VC would also try and remove dead bodies were ever possible. However, the effectiveness of Search and Destroy could now be call into question. Throughout the continuation of Search and Destroy Operations and raids the VC and NVL thought of ways to counter these tactics. This made it extremely difficult for US troops to keep the ?high? body count. This led to the US Troops to find more serviceable ways of using the Search and Destroy tactic, which meant going hands on into the suspected villages and looking for evidence to show that they were aiding Vietcong soldiers, if they found any traces of them facilitating the VC they would burn the village. This type of Search and Destroy method was called a Zippo Raid due to the type of lighter used. However, this tactic can be called into question as many South Vietnamese civilians were injured and badly affected in these raids. This would affect the US ethos of Winning the Hearts and Minds of the Vietnamese. What this actually did was it provoked the South Vietnamese people against them. ...read more.

Many air force planes contained defoliate to help save lives in the field. The code named used for these kinds of attacks was ?cowboy?. However, you cannot judge Defoliation to be a success. One aspect was to un-cover the Ho Chi Minh Trail. The Trail allowed VC to transport ammunition, guns and food to areas in the South were VC were talking refuge. The trail went through a vast type of terrain varying from jungles to mountainous regions. The US never found the Trail after countless defoliation and search missions due to the fact that the trail never went through Vietnam itself, it went through Neighbouring countries such as Cambodia. Moreover, the preposterous amount of Defoliants exposed to civilians caused major birth defects to new born babies. In addition, Agent Orange was not the only type of chemical used in the Vietnam War. There was a substance called Napalm used additionally. Napalm was used from about 1965 to around 1972. Napalm is an adhesive petroleum which is an almost jelly like substance, but when ignited sticks practically to anything. Napalm was first used in flamethrowers for the US ground troops. They burned sections of the forest down in hopes of eliminating guerrilla fighters. Later into the War B-52 Bombers began to drop bombs containing the substance napalm. These bombs were quite deadly as they were capable of destroying 2500 square yards. The amount of Napalm used was three times as much as that was used in World War II. ...read more.