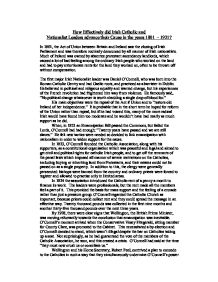 How Effectively did Irish Catholic and Nationalist Leaders advance their Cause in the years 1801 - 1921?

How Effectively did Irish Catholic and Nationalist Leaders advance their Cause in the years 1801 - 1921? In 1801, the Act of Union between Britain and Ireland saw the closing of Irish Parliament and was therefore routinely denounced by all manner of Irish nationalists. Much of Ireland was owned by absentee protestant ascendancy landlords, which caused a lot of bad feeling among the ordinary Irish people who worked on the land and had to pay extortionate rents for the land they worked on, often to be thrown off without compensation. The first major Irish Nationalist leader was Daniel O'Connell, who was born into the Roman Catholic Gentry and had Gaelic roots, and practiced as a barrister in Dublin. He believed in political and religious equality and wanted change, but his experiences of the French revolution had frightened him way from violence. He famously said, "No political change whatsoever is worth shedding a single drop of blood for." His main objectives were the repeal of the Act if Union and to "restore old Ireland of her independence." It is probable that in the short term he hoped for reform of the Union rather than repeal, but if he had voiced this, many of the more radical Irish would have found him too moderate and he wouldn't have had nearly as much support as he did. When, in 1821 an Emancipation Bill passed the Commons, but failed the Lords, O'Connell had had enough; "Twenty years have passed and we are still slaves." He felt new tactics were needed so decided to link emancipation with nationalism in order to widen support for the cause. In 1823, O'Connell founded the Catholic Association, along with his supporters, as a constitutional organisation which was peaceful and legal and aimed to get civil and political rights for catholic Irish people, and to get off the remnants of the penal laws which imposed all manner of severe restrictions on the Catholics, including buying or inheriting land from Protestants, and their estates could not be passed on as a single property. ...read more.

Initially, Gladstone was opposed to the idea, but at some point in the 1880s he had begun to feel that a Parliament in Dublin could be the solution to the Irish problem. In December 1885, he went public with his new shift towards home-rule. Lord Salisbury, the leader of the Conservatives, adopted an extremely oppositional role to the idea and the Liberal Party was split on the issue, and eventually ninety-three dissident Liberals voted against the Bill. The effect of this was disastrous for Ireland and the Liberals. Parnell never had another chance to deliver home-rule to Ireland as his political career was ruined when a member of his own party, Captain O'Shea, filed for divorce on grounds that his wife, Kitty O'Shea, had been having an affair with Parnell. This shocked Catholic Ireland, which was appalled with public immorality, and Parnell's career never recovered from the scandal. In 1891, Parnell died, but Home-rule lived on as an idea. Gladstone's second attempt in 1893 actually passed it's various stages in the Commons only to be blocked by the Lords. It didn't return until 1912. Parnell's aim had been to unite nationalists behind him to achieve home-rule legally through Westminster's Parliament. His methods were those of a practical politician, and having links with extreme nationalists helped conjure support and perhaps appear more of a threat. He built up an obedient, united party which was well organised and was successful at keeping religion out of politics by being a Protestant leading an essentially Catholic party, and kept most nationalists on side by campaigning for home-rule, which for the first time became a realistic prospect rather than a vague hope. Parnell achieved a lot through land reform and was effective in his methods as a politician. He only missed his ultimate aim, rather unfairly, by a whisker. The Boer War of 1899-1902 created excitement in Dublin and saw the forming or another nationalist group, namely Sinn Fein, under the leadership of Arthur Griffiths. ...read more.

The treaty was bitterly disliked by most nationalists, but Collins argued that it was the best he could achieve at the time, and that the border would only be a temporary measure. The Irish Parliament voted narrowly to accept the treaty by sixty-four to fifty-seven. But this didn't resolve the matter and once again the nationalist movement began to tear itself apart. In April 1922, a civil war began in Ireland between Collins' pro-treaty forces and the anti-treaty men, led by de Valera. The free Staters were particularly ruthless, executing seventy-seven dissident republicans, many of whom were considered to be 'heroes' in the Anglo-Irish war, Though Collins was to win this battle, and achieve what he set out to achieve, he paid the ultimate price for his victory, as on August 22nd, 1922 he was assassinated in his home county of Cork. The border, though, remains in place. Overall, Irish Catholic and Nationalist leaders did eventually achieve their main aims. O'Connell emancipated the Catholics, and although they never reached their goals in their life times, Davitt, Parnell, and Redmond did a lot to push forward Home-rule and make it an important priority for the British Government. Catholicism, however, despite being a prevalent factor in the Anglo-Irish struggle wasn't a main issue and the strongest feelings weren't raised by religion, but by nationalism and disputes over land. The more violent leaders, when organised properly, unlike the Fenians, seemed to have achieved more in the long run: Michael Collins, despite being assassinated, essentially gained Ireland it's independence, and this was mainly achieved as a result of the Anglo-Irish war, de Valera and the setting up of Dail Eireann. Although, without the non-violent, legal approaches to gain power made by earlier leaders, the British Government may have been harder on Ireland and restricted it's freedoms once again. And without O'Connell's achievement of Catholic emancipation, many of the later leaders may never have spoken out, as they wouldn't have been able to stand in Parliament. 5 ...read more.