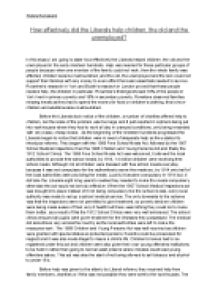 How effectively did the Liberals help children, the old and the unemployed?

﻿History Homework How effectively did the Liberals help children, the old and the unemployed? In this essay I am going to state how effectively the Liberals helped children, the old and the unemployed in the early nineteen hundreds. Help was needed for these particular groups of people because when one member of the family could not work, then the whole family was affected; children became malnourished, and the old, the unemployed and the sick could not support their families with any money to even afford the basic essentials needed to survive. Rowntree?s research in York and Booth?s research in London proved that these people needed help, the children in particular. Rowntree?s findings showed 10% of the people in York lived in primary poverty and 18% in secondary poverty. Rowntree observed families missing meals as they had to spend the money for food on children?s clothing, this is how children and adults became malnourished. Before the Liberals took notice of the children, a number of charities offered help to children, but the scale of the problem was too large and it just resulted in orphans being put into workhouses where they had to work all day in cramped conditions, only being rewarded with very basic, cheap meals. ...read more.

Children’s homes had to be registered under this act and children were also given their own young offenders institutions to be held in rather than going to normal adult prisons where inmates could lead young offenders astray. This act was also the start of not being allowed to sell tobacco and alcohol to under 16’s. Before help was given to the elderly by Liberal reforms, they received help from family members, charities or if this was not possible they were sent to the workhouses. The 1908 Pensions Act was a welcome relief to the poor however the wealthy people did not agree with the pensions act. Pensions insured a person over 70 with no other income could receive a total of 5 shillings a week. The pension was good because it was non-contributory which meant that the elderly did not have to put money in to get it, by 1914 there were almost 1 million claimants. Even though the Pensions Act was passed in 1908 it did not come into effect until January 1909. There were a lot of terms and conditions for the pension; people earning £31per year were not eligible for the pension, also widows and families were not paid pensions and you had to have lived in Britain for 20 years to receive it. ...read more.

Lastly the National Insurance Act (Part 2) came into effect. In certain trades such as ship building you could receive only 7s for 15 weeks per year when you were unemployed if you payed in 2½d per week. There were weekly contributions from the employee, employer and government this way. Yet again with this act they did not provide enough, although this was done deliberately to encourage saving. With this act you also had to be registered at labour exchange in order to get the benefit. To conclude, I think the sick and unemployed/underemployed were given the least help because the reforms that were put into place to help them were full of terms and conditions; I feel this slightly defeated the goal of trying to help these vulnerable people. I think the group that needed the most help were the children because they did not cause poverty for themselves it was thrust upon them as they were born into it and I feel they rightly got the most help. Four acts and reforms were put in place for children and after adjustment they worked very successfully. I am also glad the elderly were happy with their pensions but I do still feel the sick and unemployed/underemployed deserved more help. ...read more.