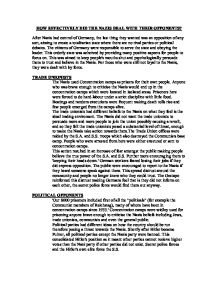 HOW EFFECTIVELY DID THE NAZIS DEAL WITH THEIR OPPONENTS?

HOW EFFECTIVELY DID THE NAZIS DEAL WITH THEIR OPPONENTS? After Nazis had control of Germany, the last thing they wanted was an opposition of any sort, aiming to create a totalitarian state where there are no rival parties or political debates. The citizens of Germany were responsible to serve the state and obeying the leader. This orderly state was acheived by providing many positive aspects for people to focus on. This was aimed to keep people's mouths shut and psychologically persuade them to trust and believe in the Nazis. For those who were still not loyal to the Nazis, they were dealt with by force. TRADE UNIONISTS The Nazis used Concentration camps as prisons for their own people. Anyone who was brave enough to criticise the Nazis would end up in the concentration camps which were located in isolated areas. Prisoners here were forced to do hard-labour under a strict discipline with little food. Beatings and random executions were frequent making death tolls rise and few people emerged from the camps alive. ...read more.

This consolidated Hitler's position as it meant other parties cannot recieve higher votes than the Nazi party if other parties did not exist. Secret police forces and the Hitler's own elite force the S.S. CHURCH LEADERS In early stages of the Nazis regime, there was some form co-operation between the Nazis and the Churches. Hitler agreed to leave the Catholic Church alone and allowed it to keep control of its schools if the churched agreed to stay out of politics. With the Catholic Church dealt with, Hitler now moved on to Protestant Churches and he tried to make all Protestant Churches to come together to form the Reich Church. However, many Germans felt their loyalty were with the original churches rather than the state-approved Church. The church-goers of both beliefs either supported the Nazis or did little to show their distaste towards them. Catholic Bishop Galen criticised the Nazis in the 1930s and in 1941, he led a protest against the Nazi policies of killing mentally ill and disabled people, forcing the Nazis to temporarily stop their actions. ...read more.