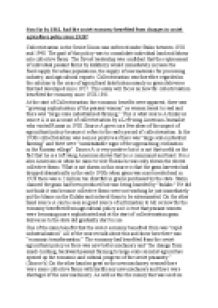 How far by 1941, had the Soviet economy benefited from changes in agricultural policy since 1928?

﻿How far by 1941, had the soviet economy benefited from changes in soviet agriculture policy since 1928? Collectivisation in the Soviet Union was enforced under Stalin between 1928 and 1940. The goal of this policy was to consolidate individual land and labour into collective farms. The Soviet leadership was confident that the replacement of individual peasant farms by kolkhozy would immediately increase the food supply for urban populations, the supply of raw materials for processing industry, and agricultural exports. Collectivisation was therefore regarded as the solution to the crisis of agricultural distribution mainly in grain deliveries that had developed since 1927. This essay will focus on how far collectivisation benefited the economy since 1928-1941. At the start of Collectivisation the economic benefits were apparent, there was ?growing sophistication of the peasant women? as women learnt to read and there was ?large scale industrialised farming.? This is what source A thinks as source A is an account of collectivisation by a Left wing American Journalist who visited Russia in 1930. Source A gives us a few ideas of the impact of agricultural policy because it refers to the early period of collectivisation. In the 1930s collectivisation was seen as positive as there was ?large scale industrial farming? and there were ?unmistakable signs of the approaching civilisation in the Russian village?. ...read more.

Source B was right to say that many peasants ?were psychologically unprepared to become members of collective farms.? Source B does show us that the collective farms were successful but it criticises the way they were run. This is evident when it says ?some over enthusiastic officials forced peasants into joining giant collective farms which were unmanageable. Some middle class peasants were mistakenly lumped together with kulaks.? He admits that there were failures but he does not blame the communists this is because it was written in 1981 when the communist party still controlled the Soviet Union. During the period of 1928-1941, the first second and third five year plans were introduced. These plans were introduced to put central planning at the forefront of the soviet economy. The key features of the plans were the setting of production and output targets which industrial enterprises had to achieve. The plans also set targets to key industries. There were many failures and successes of the five year plans. The first five year plan benefitted the economy as there was increased production and output in electricity (which had trebled), coal, iron, steel (which had doubled) and steel increased by one third. Huge new industries complexes were also built and new tractors were built in Stalingrad and other places to meet the needs of mechanised agriculture. ...read more.

Therefore peasants remained unenthusiastic and agriculture remained inefficient as ?collectivisation reduced food output to below the 1928 level, resulting in overall reductions in output.? Some say this was a worse performance than 1913 tsarist Russia! Therefore in conclusion the soviet economy has benefited from changes in soviet agricultural policy as there was huge industrialisation, women became more educated and the peasantry way of living changed. At the time where mass industrialisation was needed and needed to be done fast I think that collectivisation was probably the only way to get the grain that they needed. On the other hand I do believe that the soviet economy did not benefit from changes in soviet agriculture policy as there was a huge famine where 7 million peasants died. The Kulaks were exterminated and the economy was not benefitting as the peasants were protesting and had no incentive to work. There was a shortage of new machinery and not enough grain was being produced. A lot of peasants hoarded their grain. Also because a lot of grain was being exported there was not enough for the peasants to eat. This is therefore why I believe that the economy did not benefit that much, although there were benefits to the economy there were a lot more disadvantages and it took a lot of time for the economy to get over collectivisation. ...read more.