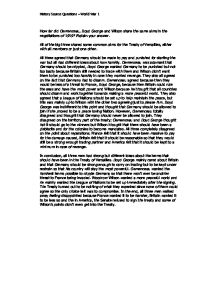 How far did Clemenceau, Lloyd George and Wilson share the same aims in the negotiations of 1919?

How far did Clemenceau, Lloyd George and Wilson share the same aims in the negotiations of 1919? Explain your answer. All of the big three shared some common aims for the Treaty of Versailles, either with all members or just one other. All three agreed that Germany should be made to pay and punished for starting the war but all had different ideas about how harshly. Clemenceau was adamant that Germany should be crippled, Lloyd George wanted Germany to be punished but not too badly because Britain still needed to trade with them and Wilson didn't want them to be punished too harshly in case they wanted revenge. ...read more.

Lloyd George was indifferent to this point and thought that Germany should be allowed to join if she proved to be a peace loving Nation. However, Clemenceau totally disagreed and thought that Germany should never be allowed to join. They disagreed on the territory part of the treaty; Clemenceau and Lloyd George thought hat it should go to the winners but Wilson thought that there should have been a plebiscite and for the colonies to become mandates. All three completely disagreed on the point about reparations. France felt that it should have been massive to pay for the damage caused, Britain felt that it should be reasonable so that they would still be a strong enough trading partner and America felt that it should be kept to a minimum in case of revenge. ...read more.

Clemenceau wanted the harshest terms possible to cripple Germany so that there won't ever be another threat to France being invaded. Woodrow Wilson wanted a more peaceful world and he mainly wanted the League of Nations to be set up immediately after the signing. The Treaty turned out to be nothing of what they expected since none of them could agree so the only choice left was to compromise. In the end, all three men walked away feeling disappointed because France wanted it to be harsher, Britain wanted it to be less so and the in America, the Senate refused to sign the treaty and some of Wilson's points didn't even get into the Treaty. History Source Questions - World War 1 ...read more.