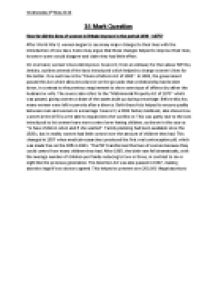 Transfer-Encoding: chunked ﻿16 Mark Question How far did the lives of women in Britain improve in the period 1939 - 1975? After World War II, women began to see many major changes to their lives with the introduction of new laws. Some may argue that these changes helped to improve their lives, however some would disagree and claim they had little effect. On one hand, women?s lives did improve. Source D, from an obituary for the Labour MP Roy Jenkins, outlines several of the laws introduced which helped to change women?s lives for the better. One such law is the ?Divorce Reform Act of 1969?. In 1969, the government passed this Act which allowed a divorce on the grounds that a relationship had broken down, in contrast to the previous requirement to show some type of offence by either the husband or wife. The source also refers to the ?Matrimonial Property Act of 1970? which was passed, giving women a share of the assets built up during a marriage. ...read more.

The Abortion Act was also passed in 1967, making abortion legal if two doctors agreed. This helped to prevent over 200,000 illegal abortions per year in Britain. In summary, women?s lives improved because they had begun to gain equality with men, and they had more control over the amount of children they had. However, some may say that women?s lives had not improved. Source F, from a report by the leader of the Six Points Group in 1971, shows how many employers did not abide by the Acts introduced to help women. Concerning the Equal Pay Act, it says: ?Those men are putting heels on the men?s shoes. The women are putting heel?s on women?s shoes. It?s not the same work!?. The political campaign of the women?s movement had finally achieved an Equal Pay Act in 1970. This extended ?equal pay for equal work? throughout the private sector, although the Act was not introduced until 1975. ...read more.

This also applied to other Acts, as not all of them would have had an impact on all women across Britain. In summary, women?s lives may not have improved because the Acts introduced were not being consistently enforced, or simply did not affect all women. In conclusion, I do think women?s lives improved between 1939 and 1975. Although the Acts introduced hadn?t affected all women, they still went a great length to improving the experiences of women in Britain as a whole. Acts like the ?Equal Pay Act? and ?Divorce Act? helped women to further work towards equality with men, helping them to become more respected within the workplace and within a marriage. This is best shown by Source H, which states that girls growing up in the 1970s could ?marry when and whom she wanted?, ?have children when and if she wanted? and ?choose whether she remained at home as a housewife or followed her own career?. All these things helped women to break from the tradition in Britain, and opened their lives up with many more opportunities. http://cdn2-b.examiner.com/sites/default/files/styles/image_content_width/hash/ce/22/ce22d3d1d7c232579b33032022f29c06.png http://graphics8.nytimes.com/images/2007/07/19/nyregion/20podcast.span.jpg ...read more.