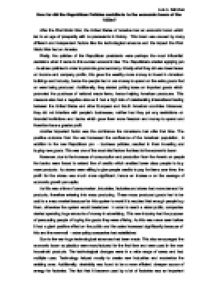 How far did the Republican Policies contribute to the US economic boom of the 1920s?

How far did the Republican Policies contribute to the economic boom of the 1920s? After the First World War, the United States of America had an economic boom which led to an age of prosperity with no precedents in history. This boom was caused by many different and independent factors like the technological advance and the impact the First World War had on America. Firstly, the policies of the Republican presidents were perhaps the most influential decisions when it came to this sudden economic rise. The Republicans started applying pro - business policies in order to promote good economy. Mostly what they did was lower taxes on income and company profits, this gave the wealthy more money to invest in American buildings and industry, hence the people had more money to spend on the extra goods that on were being produced. ...read more.

This was one of the most vital factors that lead to the economic boom. Moreover, due to the increase of consumption and production from the American people the banks were forced to extend line of credits which enabled lower class people to buy more products. As stores were willing to give people credits to pay for items over time, the profit for the stores was much more significant, hence an increase on the average of economic growth per capita. As this was a time of consumerism, industries, factories and stores had more demand for products, therefore entering into mass producing. These mass produced goods had to be sold to a mass market because for this system to work it is required that enough people buy them, otherwise the system would breakdown. ...read more.

After the First World War, the United States were the country with the best economic situation as it had supplied Europe with many goods during the war and had taken over the European markets on the other side of the world. Plus, the U.S.A was the most technologically advanced country at that time and this also aided in the rise of the economic boom. In conclusion, even though there were several factors that had a relevant influence on the economic boom, the most important one was the measures taken by the Republican government. Without these pro - business measures the economic boom would not have had happened. The measures taken had a chain reaction effect that proved to be quite positive as it was the best economic times up to that time. ?? ?? ?? ?? Luis A. S�nchez ...read more.