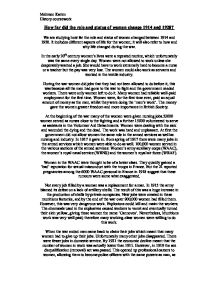 How far did the role and status of women change 1914 and 1928? We are studying how far the role and status of women changed between 1914 and 1928. It includes different aspects of life for the women; it will also refer to how and why life changed during the war. In the early 20th century women's lives were a repeated routine, which unfortunately was the same every single day. Women were not allowed to work unless she desperately wanted a job. She would have to work extremely hard to become a nurse or a teacher but the pay was very low. The women could also work as servants and worked in the textile industry. During the war women did jobs that they had not been allowed to do before it, this was because all the men had gone to the war to fight and the government needed workers. There were only women left to do it. Many women had reliable well-paid employment for the first time. Women were, for the first time ever, paid an equal amount of money as the men, whilst they were doing the 'men's work'. The money gave the women greater freedom and more importance in British Society. At the beginning of the war many of the women were given nursing jobs.23000 women served as nurses close to the fighting and a further 15000 volunteered to serve as assistants in the Volunteer Aid Detachments. Women were dealing with the sick and wounded the dying and the dead. The work was hard and unpleasant. At first the government did not allow women the same role in the armed services as well as nursing and industry. In 1917 it gave in. from spring of 1917 there were many jobs in the armed services which women were able to do as well. 100,000 women served in the various sections of the armed services: Women's army auxiliary corps (WAAC), the women's royal naval service (WRNS) and the women's royal air force (WRAF). ...read more.

The ones who did had to be over 30 and a householder or 21 and married to a householder. The same act gave men over 21 the right to vote. Women were also able to become MP's. Constance Markiewicz, a Sinn Fein Candidate was elected in 1918 but did not take up her seat. The first women did not take up her seat. The first woman to actually become an MP was Nancy Astor who was elected in 1919. The vote did not go to all women over 21 until 1928, when women finally had got equal rights. I think that the world war one led to great changes in the role of women in Britain because before the war women had absolutely no freedom, during the war the women took over the men's job to show that they were worthy and equal to men. Before the war the women were not allowed to smoke, drink or go out with men. But after the world war they wore shorter skirts and short hair became fashionable, the fashion changed during the war because their clothes had to be practical for their jobs, the women went out with men without chaperone, they smoked and wore make up in public for the first time. They also got to do jobs with decent pays such as: conductors, buses, trams, police, chimney sweeps and worked in bakeries. 1577 words! Civil Rights in the USA! Question one! After studying sources A and B, the source that I think the most useful is source A. This is because it was taken at the time of the event, rather than written after the event and because it is a photograph which means that it is also more reliable as a photo can not show a lie. Source A is a photograph of a black student on her way to enrol at the all-white central high school in Little Rock, Arkansas, September 1957. ...read more.

The film shows the bad ways that the blacks were treated. For example: it shows that the blacks were not allowed to drink from the same water fountains as the whites, they had different washrooms, they were not allowed to be buried in the same cementry as the whites and if a white person was seen with a black he would be shot. The white men also put windows of the black houses on fire. They would throw bombs at the houses and blow them up. I think that this source is quite reliable because it is not bias and shows the truth about the white men treating the innocent blacks badly. But the source also shows the white police did do their job properly and helped the blacks. One of the sources that supports the interpretation is source A. This is because source A is showing the blacks had now started to be allowed to do their education at the same colleges as the whites. The second source that supports the interpretation is source B. This supports the interpretation because it is saying that the blacks were helped by the police to get to the college without being harmed this shows that attitudes were changing towards the blacks and they were getting some help. The third source that supports the interpretation is source D. Source D is the speech that Martin Luther King made about how they made a difference without violence. This March was done to end segregation for civil rights. The other sources that support the interpretation are sources E, F, G and H.These all support the interpretation because they show that the attitudes of whites changed towards the black and there was no more segregation. They also show that the blacks were given the votes and were able to become politicians. I think that these sources are quite reliable because they are mostly parts from speeches that leaders made and so they are primary sources, which means that they were written at the time of the event. 1462 words ?? ?? ?? ?? Mehreen Karim History coursework ...read more.