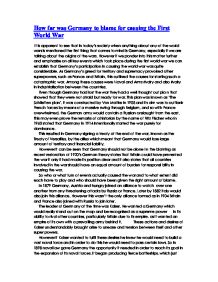 How far was Germany to blame for causing WW1

How far was Germany to blame for causing the First World War It is apparent to see that in today's society when anything about any of the world wars is mentioned the first thing that comes to mind is Germany, especially if we are talking about the origins of the wars. However if we ponder into this matter further and emphasise on all key events which took place during the first world war we can establish that Germany's participation in causing the world war was quite considerable. As Germany's greed for territory and supremacy provoked other superpowers, such as France and Britain, this outlined the causes for starting such a catastrophic war. Among these causes were Naval and Arms rivalry and also rivalry in Industrialisation between the countries. Even though Germany had lost the war they had a well thought out plan that showed that they were not afraid but ready for war. This plan was known as 'The Schlieffen plan'. It was constructed by Von Moltke in 1905 and its aim was to outflank French forces by means of a massive swing through Belgium, and so with France overwhelmed, the German army would contain a Russian onslaught from the east. This may even prove the remarks of a historian by the name of Fritz Fischer who in 1960 stated that Germany in 1914 intentionally started the war purely for dominance. ...read more.

This in turn helped Germany's reputation in industry and caused an increase in population and markets in and around the area. Although the increase was good for Germany it caused Europe to become over populated and so people decided to move to areas with large amounts of space and so the best option would be to move to areas in Africa. When Germany noticed this they decided to take parts of Africa for themselves which was not seen on too well by Britain and France. Britain and France decided to share out areas of Africa between themselves. Britain would take Egypt and France would be given Morocco. But nonetheless Germany still took parts of Africa and now signs of there increase in territory was beginning to exemplify as they were also getting bases as far as the pacific and increasing their trade and so with it their resources in order to produce the dominant country which they desired. In 1905 Kaiser decided to make an unscheduled stop in Tangier to try and get the support of the Moroccans. This made France very angry as it knew Germany was trying to test its patience. This resulted in an international conference to resolve the matter. This conference was called the Algezeras conference and took place in 1906. Germany was outvoted by all the obvious countries but surprisingly was also voted against by Italy, one of her allies. ...read more.

Germany also declared war against France who was Russia's allies. So in concluding we can see that Germany had a great role to play in causing the First World War but were not alone as other issues also played a part. There were other more specific causes due to individual interests in economy, nationalism, rivalry and sheer greed for supremacy. Two main alliances had arouse in Europe and if any one country from either side decided for war the rest would have to join resulting in a calamitous war which we can see is what happened. All countries were provoked and teased into war which could have been prevented if it wasn't for the idealistic plans of dominancy especially from Germany and Serbia. But we can see that the main trigger for the war was the assassinations in Sarajevo which gave countries like Germany the perfect excuse to go to war with their great rivals, both Russia and France. So we must ask ourselves was the alliance just in placing the war-guilt on Germany and making them face the repercussions of the war as Kaiser never actually set out to start a war but was pushed into it by her allies and anger against Russia. So wouldn't it have been more just if all the countries involved shared an equal amount of burden for sending the world into a state of war on a shattering scale ...read more.